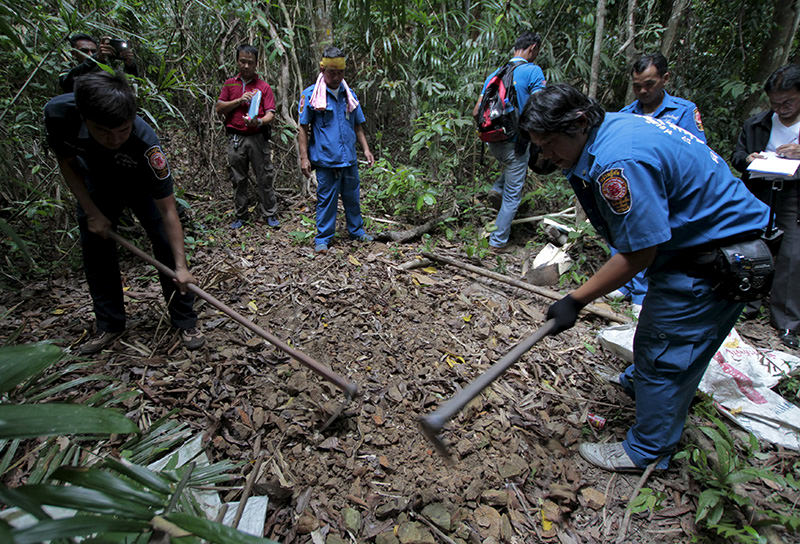 Security forces and rescue workers inspect a mass grave at a rubber plantation near a mountain in Thailand's southern Songkhla province May 7, 2015 (Reuters Photo)
by Daily Sabah with Agencies May 24, 2015 12:00 am
Malaysia's interior ministry confirmed Sunday that they have discovered a series of graves in more than a dozen abandoned camps used by human traffickers on the border with Thailand, where Rohingya Muslims have been held.

The finding follows a similar discovery earlier this month by police in Thailand, who unearthed at least 33 bodies from shallow graves on the Thai side of the border.

Minister Zahid Hamidi expressed his shock to reporters, saying the camps in the border town of Padang Besar, northern Perlis state, may have been in the area for even five years.

"These graves are believed to be a part of human trafficking activities involving migrants," he said, adding that police have found 17 abandoned camps that they believe were used by traffickers.

There was no immediate word on how many bodies had been recovered, or how old the alleged trafficking camps or graves were.

He added that police were trying to identify and verify "the mass graves that were found."

Authorities say they have known for years that the area on the Thai-Malaysia border was used to smuggle Rohingya Muslims, a persecuted minority in Myanmar, as well as Bangladeshis and other migrants, to third countries including Malaysia.

Earlier this month, the bodies of more than 30 migrants were discovered in southern Thailand, prompting a crackdown that led to smugglers fleeing and boatloads of the migrants then turning up on Thai, Indonesian and Malaysian shores, while many more remained at sea.
Last Update: May 24, 2015 12:49 pm
RELATED TOPICS