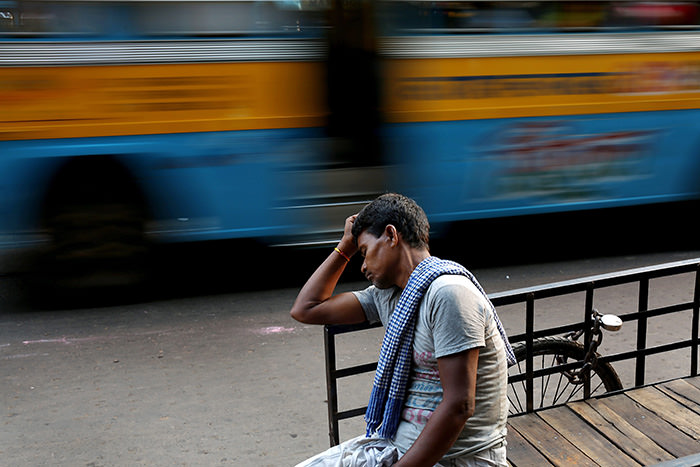 An Indian richshaw puller rests on a street while the temperature reaches 38 degree Celsius in Calcutta, India, 16 May 2015 (EPA Photo)
by May 25, 2015 12:00 am
More than 500 people have died in a heatwave that has swept across India and is showing little signs of abating, officials said Monday.

The southern states of Andhra Pradesh and Telangana were the worst affected with temperatures reaching 48 degrees in some areas.

Heatwave conditions have prevailed in the region since April but most of the deaths have been reported over the past 10 days.

In neighbouring Andhra Pradesh, 246 people had died since May 18, with the Prakasam district accounting for 57 deaths, an official at the state disaster management department said.

Large swathes of northern and central India, including national capital New Delhi, were also in the grip of the severe heat wave.

Aid workers say the actual toll could be much higher as many of the deaths in remote villages go unreported.

Many low-income workers such as laborers and cycle-rickshaw drivers cannot afford to stop working to avoid the conditions.

Government officials in the southern states were struggling to provide drinking water and advised people not to step out of their homes or workplaces during the hottest hours between 11 am and 4 pm.
Last Update: May 25, 2015 12:25 pm
RELATED TOPICS