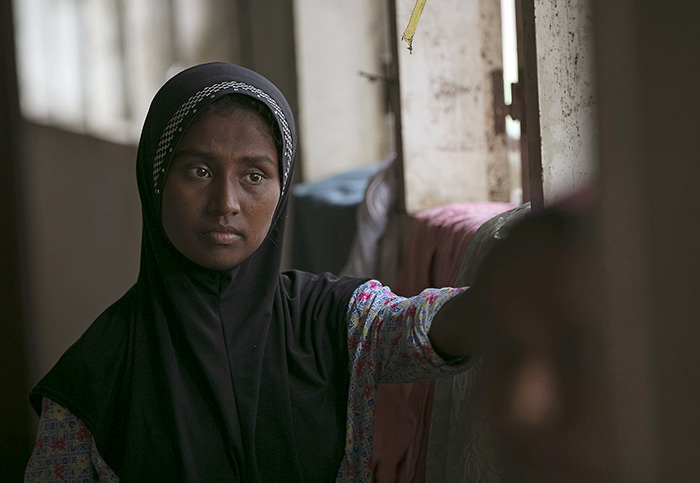 A Rohingya migrant, who arrived in Indonesia this week by boat, stands inside a temporary shelter in Aceh Timur regency, near Langsa in Indonesia's Aceh Province May 24, 2015 (Reuters Photo)
by Mehmet Çelik May 25, 2015 12:00 am
Myanmar, the Burmese government has passed a controversial birth control law, which the critics say targets ethnic minorities, particularly the country's Muslim commuity, as a result of pressure on the government by the Buddhist monks, who fear the growth of Muslim population, the Guardian has said.

Although criticized by the international community and rights groups, President Thein Sein has signed the Population Control Health Care Bill, which enables local authorities to enforce on women to have a gap of 36 months in between births, restricting a basic human right.

Although the new law does not specify an ethnic community as a target group, considering the thousands of Rohingya Muslims who escape the country for fear of persecution and seeking aslyum in Indonesia, Malaysia, and Thailand, international human rights groups have pointed out to the Muslim community as the target group, given the treatment they receive by the country.

"Activists with a racist, anti-Muslim agenda pressed this population law so there is every reason to expect it to be implemented in a discriminatory way," Human Rights Watch Asia director Brad Adams said, according to the Guardian.

Rohingya Muslims, or known as boat people by their recent name, have been escaping the country with boats full of migrants who try to escape the killings by the extremist Buddhists. International community has raised their concern over the tragic situation of the boat people as many of them die out of hunger or drawn in sinking ships before they make it to a safe shore.

Countries, including Turkey, United States, Philippines, and Gambia have offered to help the migrants fleeing the oppression, in addition to Malaysia and Indonesia agreeing to accept the asylum seekers coming to their shores.