At least 38 killed in rest home fire in central China 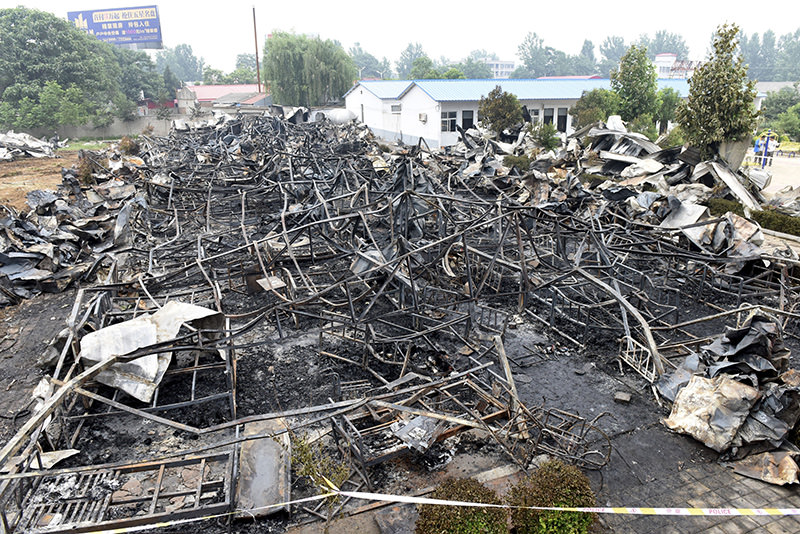 This photo released by China's Xinhua News Agency shows a fire-gutted rest home in Pingdingshan, central China's Henan Province Tuesday, May 26, 2015 (AP Photo)
by Daily Sabah with Agencies May 26, 2015 12:00 am
A fire at an old people's home in central China killed 38 people and injured six, authorities said on Tuesday.

The fire broke out late on Monday at a private rest home in the city of Pingdingshan in Henan province, according to a statement from the province's work safety administration. Two of the injured were in serious condition, the statement said.

The cause of the fire, which injured six people, was unclear, Xinhua said. Rescue efforts were still under way.

Xinhua said the building housed 51 elderly people and quoted one survivor, 82-year-old Zhao Yulan, as saying only two of the 11 people living in her room made it out alive. Some of the remains of people killed in the fire were burned beyond recognition, Xinhua said.

Chinese President Xi Jinping urged rescue personnel to urgently aid the injured and victims' families and determine the cause of the fire as well as who was responsible, state broadcaster CCTV said.

China has a history of similar disasters. Workers are often poorly trained or ill-equipped to protect themselves from accidents.

A fire at a warehouse in Guangdong province killed at least 17 people in February, and a blaze at a poultry slaughterhouse in the northeastern province of Jilin in 2013 killed 120 people.

The average age is rising in China, the world's most populous country, and demographers have said government limits on family size threaten the future of the economy as fewer people are left to pay and care for a greying population.