Unaccompanied kids among migrants who arrived in Indonesia 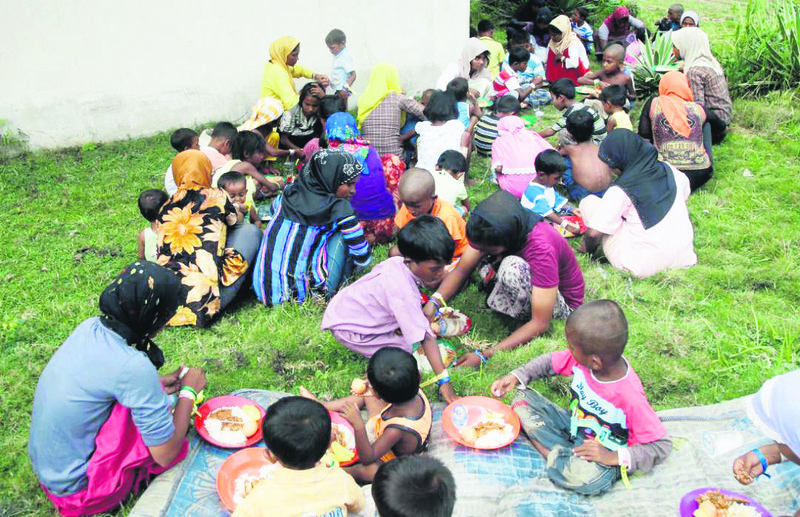 by Associated Press May 26, 2015 12:00 am
It was just the two of them, brother and sister, out on the open ocean with hundreds of other desperate migrants, mostly Rohingya Muslims fleeing their homes in Myanmar. For nearly three months, the siblings comforted each other when rolling waves thrashed their boat, when their empty bellies ached and when they were beaten for trying to stand up to stretch their legs. As the oldest, Mohammad Aesop - just 10 years old - knew it was his job to keep his 8-year-old sister safe. But with the Thai crew wielding guns and threatening to throw troublemakers overboard, he felt helpless. Theirs was the first boat to wash ashore in Indonesia two weeks ago, followed by a number of other wooden trawlers crammed with hungry, dehydrated people. Many were abandoned at sea by their captains following a regional crackdown on human trafficking networks.

So far, nearly 3,100 Rohingya and Bangladeshis have landed in three Southeast Asian countries, according to the International Organization for Migration. More than half of them wound up in Indonesia, where nearly 170 children who traveled alone, some after being tricked or kidnapped, wait to learn what will happen next. Labeled one of the world's most persecuted minorities, the Rohingya have been fleeing predominantly Buddhist Myanmar for decades. But it was only after the country started moving from dictatorship to democracy in 2011 that the numbers really spiraled, with newfound freedoms of expression lifting the lid off deep-rooted hatred felt by many toward the ethnic Muslims. Hundreds were killed, and thousands more were placed in internment camps where they cannot work and medical care is scarce.

In recent months, however, flight from the area has been triggered less by fear than by desperation and greed. Rohingya brokers, eager to fill boats with human cargo that fetch $100 each, roam villages and displacement camps touting stories of jobs waiting overseas. Bored, frustrated and naive, youngsters are the easiest to trick. Once on board the ships, they are also the most vulnerable. At the Indonesian seaside camp in Aceh province's Kuala Cangkoi where Mohammad and his sister now stay, nearly a third of the migrants are children. Some of the smallest Rohingya suck on lollipops and munch on potato chips passed out by local residents and students who come to snap photos of the group. Other exhausted little ones, who went three days without food on the boat, lie face down asleep on the cool white tile of a pavilion where fish is normally hawked. "The vulnerability of these children can never be overstated," said Steve Hamilton, deputy chief of mission at the International Organization for Migration in Indonesia, adding that the government has said special care will be provided to ensure the safety of unaccompanied minors. "The hardships they have endured at such young ages are heartbreaking."

Mohammad and his sister, Untas Begum, lost their mother three years ago, when sectarian violence in Myanmar's troubled state of Rakhine reached its peak. She was killed by a machete during an attack at a market in the state capital, Sittwe. Her children were taken in by a relative, who struggled to care for them with little money for food. Their father has been living in Muslim-majority Malaysia, one of the few places where Rohingya can find menial jobs and a semblance of acceptance. He decided it was time for his children to join him, and paid a broker in March to put them on a boat in the Bay of Bengal. The siblings were forced to sit with their knees bent so that another person could be seated in between their legs - like human dominos stacked together as closely as possible to ensure the biggest payoff from ransoms of around $2,000 per person demanded from the migrants' families after they left Myanmar's territorial waters. To sleep, they simply leaned back into the chest of the person behind them. When their legs shook and ached from being locked in one position for so long, they were beaten for moving or trying to stand. The heat on the boat was oppressive, and the stench of sweat and soured vomit was nauseating. They were given only a few spoonful of rice gruel twice a day. Fever, diarrhea and dehydration were common among the children and adults, but no medicine was provided. Untas said she once shivered while burning hot and freezing at the same time. "We were given a little food and water, and we were on the sea for a long time," she said, sipping water casually though a straw, a precious commodity that such a short time ago was rationed to keep her alive during the journey. "We didn't have our mom or dad on the boat, so we were scared." Fear and desperation have driven smugglers to flee their vessels following recent arrests and the discovery of dozens of mass graves in Thailand and Malaysia where migrants were held in the jungle before the floating camps were set up offshore. Mohammad said one night a smaller boat approached, and as the captain and crew left, they pointed guns at the people on the larger vessel and told them that anyone who tried to follow would be killed. "He shot twice into the air. Everyone started screaming and crying," Mohammad said, adding that he threw his sister across his lap to try to shield her with his tiny body. "I thought they would kill all of us." Kuala.

The Associated Press spoke to numerous children in Myanmar who managed to escape their boats, along with those who made it to shore in Thailand, Indonesia and Malaysia. Some said they ended up at sea after brokers in Rakhine told them that if they left immediately without telling their parents, they could earn big money in Thailand and Malaysia and send it home to their impoverished families. People continued to be loaded even after the crisis began unfolding earlier this month, with abandoned boats being pushed back to sea like pinballs by the region's navies. Others, like Atau Rahman, 12, of Sittwe, reported being outright kidnapped. He said he and nine other boys were grabbed by a "weird man" and shoved onto a boat where they simply disappeared. They were held for weeks offshore until the boat was finally crammed full of enough bodies to leave. "I don't know what happened," he said at a camp in the Acehnese town of Langsa, where the most recent vessel landed last week. "We were put on the boat and tied up, and gags were put in our mouths so we couldn't talk." In a tent just behind him, a little girl with diarrhea lay listless on a plastic tarp with an IV drip strapped to her arm. Skinny women sat nearby on the ground nursing fussy babies, while some children with every rib showing ran naked through the grounds. Indonesian medical workers scurried to conduct basic health screenings and provide vaccinations, likely the first medical care many Rohingya kids have ever received. Meanwhile, a 3-year-old girl died from tetanus after arriving at the local hospital last week, and a few other kids were receiving treatment there.
RELATED TOPICS