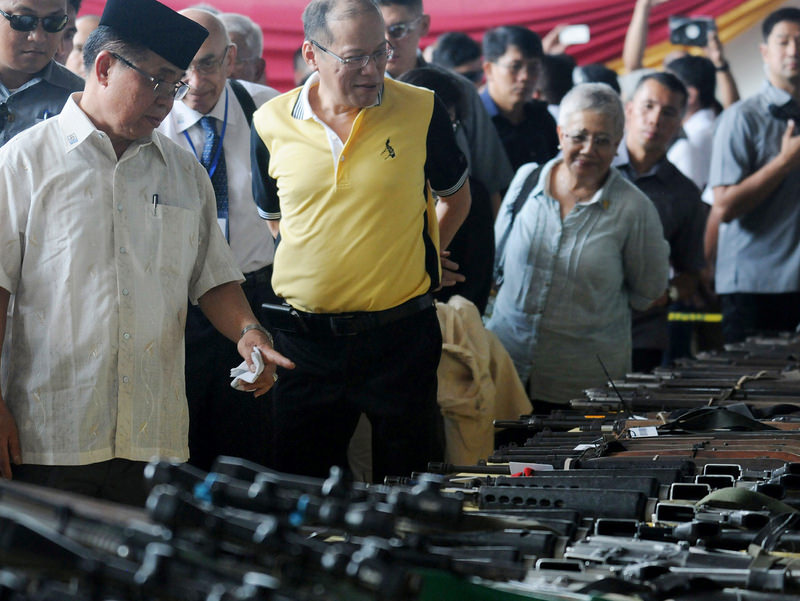 Philippines President Benigno Aquino III, centre, is briefed by Al Haj Murad Ebrahim, left, the leader of Moro Islamic Liberation Front, as he witnesses the handover of weapons (AP Photo)
by Cihangir Yıldırım Jun 16, 2015 12:00 am
The Philippines' largest Muslim rebel group, the Moro Islamic Liberation Front, has started to hand over weapons in order to show their commitment to the historic peace agreement. The new autonomy deal, signed in 2014, came after years of fighting. Seventy-five heavy weapons, including howitzers and rocket launchers, were handed over in the presence of Filipino President Bengino Aquino III and 11,000-strong group's leader al-Hajj Murad Ebrahim. Members of the Third Party Monitoring Team (TPMT), which included Turkish ambassador Haydar Berk and Hüseyin Oruç, vice president of the IHH Humanitarian Relief Foundation, attended the symbolic decommissioning ceremony in Mindanao. Representatives from the U.S. and EU also attended the ceremony.

The front's normalization process has the three main components of security, socioeconomic development and transitional justice. Over the peace deal, the Filipino government will provide a cash handout to former fighters for education, training and livelihood.

Aquino said at the ceremony that the first phase of the decommissioning of the front was a big step, showing their sincerity toward building a lasting peace. Aquino also called on all other Filipinos to support the rebel fighters' transition from decades of fighting against the government into civilian life. "Years ago, an armed group that had long been fighting with the government laying down its arms was a pipe dream. Our Moro brothers and sisters made a commitment, and before us is the concrete proof of their sincerity. Our brothers are voluntarily laying down their arms. They are extending their hand to peace," Aquino, a reformist leader whose six-year term ends in 2016, said. Talking about the handover of weapons by the front in the symbolic ceremony, Armed Forces of the Philippines (AFP) Chief General Gregorio Pio Catapang expressed his satisfaction. "This is the first time that a rebel group will be voluntarily turning over its arms, it's important to combatants to have normal, civilian lives. It's a historic event," he said.

The front's members showed their commitment by attending the symbolic ceremony with 145 fighters. "As I look at the faces of each of our 145 brothers here, I see 145 stories of struggle, of pain, of hopelessness and even of death, yet I also see 145 stories of hope and faith that indeed peace is near and that all the sacrifices have been worth it," Ebrahim said. The peace deal was welcomed in Mindanao. "Today, mothers will begin to send their children to school again without fear, and welcome them home happily. Today, children will start learning to be children, and hope never to learn about war again," the governor of the Autonomous Region in Muslim Mindanao, Mujiv Hataman, said in a statement.

The Filipino government and the front hope to end the 45-year conflict that has killed around 120,000 people, displaced 2 million and stunted growth in the poor but resource-rich south. Some 200,000 homes, 535 mosques and 200 schools were destroyed in the conflicts. Throughout the peace agreement, the front continues to surrender thousands of weapons in return for control of their economy, culture and politics if the peace deal is completed successfully. The deadline for the process is October.
Last Update: Jun 16, 2015 5:05 pm
RELATED TOPICS