14 dead, hundreds of zoo animals wiped out in Georgia floods 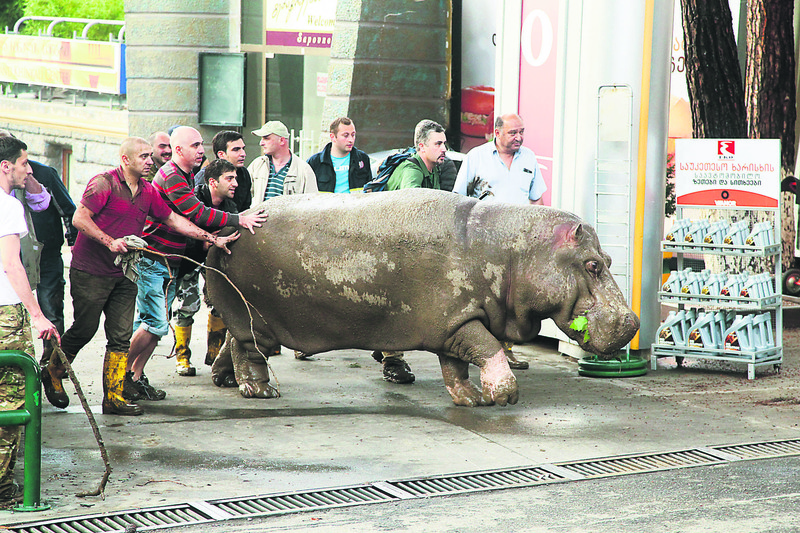 Lions, tigers and even a hippopotamus escaped, but by Monday evening, all the missing animals had either been recaptured or had perished.

Nine people were missing in Georgia's capital Tbilisi on Monday, a day after freak floods killed 14 people and swept away zoo animals, some of which were shot after being found prowling the streets. The death toll from the worst floods to hit Tbilisi in decades climbed to 14 after rescuers found an elderly man in the rubble of a destroyed house and another body in a park, officials said.

Nine people were still missing as of Monday evening, a government official said, down from an earlier count of 20. The small Vere River running through the city of 1.2 million burst its banks early Sunday after hours of torrential rain, paralyzing Tbilisi and destroying the city's zoo. More than half the zoo's approximately 600 animals, birds and fish have perished, a spokeswoman said. Many of the animals, including monkeys and penguins, drowned in the muddy waters. Others, including lions, tigers and even a hippopotamus escaped, but by Monday evening, all the missing animals had either been recaptured or had perished, zoo spokeswoman Mzia Sharashidze told Agence France-Presse. Officials had said earlier Monday that two tigers, a bear, and a jackal were still on the loose. Their fate was unclear.

A tiger that ran loose killed a man in central Tbilisi on Wednesday, an interior ministry spokeswoman said. Georgian media said the lion had been hiding in a warehouse and escaped the citywide police search for the roaming animals, many of whom were shot dead.

Some animals, including two bear cubs, found kilometers from the zoo were returned to their enclosures.

Over the past decades, Tbilisi has repeatedly suffered severe flooding, including in 1967 when floodwaters also carted off zoo animals, Sharashidze said. Tbilisi Zoo director Zurab Gurielidze and his wife nearly died trying to save the animals from the floods. "Everything has been done to save as many animals as possible," a teary-eyed Gurielidze said Sunday night.

"Special forces only shot at the animals such as tigers and lions that posed a threat to humans," he said.

Three zookeepers died in the flood, including a woman who had her hand amputated last month after a tiger attacked her.

Authorities declared a day of mourning as Georgians described scenes of chaos, saying the disaster caught the city off-guard. Survivor Bela Gvelesiani, whose house was destroyed by the flood, said that "everything happened in just two minutes. "I looked through the window and saw that the river was in my courtyard. I can't remember how we managed to get out. At first the water reached our ankles and in a split second we were up to our necks." Another resident, Aleko Korkotashvili, described seeing a man "clutching a lamp pole in the middle of a violent torrent. "He was screaming, asking for help, but we were unable to help him," he said In a show of solidarity, hundreds of volunteers joined clean-up operation across the city.

"What happened was an apocalypse," renowned Georgian actor Giorgi Nakashidze said as he helped national guard soldiers clear away mud and fallen trees. "In my lifetime, I never saw such a tragedy in our country. All those who care about our city, about people, should help rescuers and those who have suffered," he said in televised remarks.

The disaster left dozens of families homeless and destroyed several roads. Some homes were swept away in the deluge along with numerous cars and some coffins that were washed out of the ground in a cemetery.

In a statement, Prime Minister Irakli Garibashvili praised the "unprecedented show of solidarity" by the volunteers who helped in the relief effort and started appeals for money, food and clothes for the victims.

Minister of Finance Nodar Khaduri told reporters that initial estimates of $15 million in damage to infrastructure were conservative and that the final figure was likely to be much higher. Tbilisi Mayor David Narmania said reopening a 4-kilometer-long highway linking the city's two central districts would take a long time.
Last Update: Jun 17, 2015 2:17 pm
RELATED TOPICS