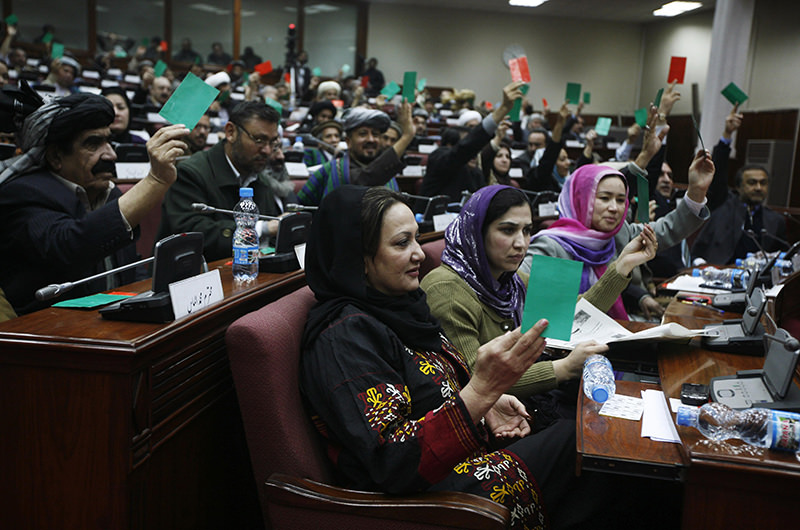 Afghan parliament members vote during a debate in Kabul, Afghanistan, Saturday, Jan. 2, 2010 (AP Photo)
by Jun 18, 2015 12:00 am
Members of an influential Islamic panel in Afghanistan have protested against President Ashraf Ghani's nomination of a woman to the Supreme Court, a milestone appointment in a country where the Taliban once banned women from most areas of public life.

Ghani's decision last week delivered on an election promise to appoint the first woman to the Supreme Court, but conservative lawmakers could fight the parliamentary confirmation of Anisa Rassouli, who now heads a juvenile court.

The step represents good news for civil rights activists worried that gains made by women might be eroded after the withdrawal of most foreign troops last year, 13 years after the U.S.-led military intervention that toppled the Taliban in 2001.

The Taliban ruled with a distorted interpretation of Islamic law and forbade women to work, attend school or leave home without a male relative and the all-encompassing burqa covering the face and body.

More than a decade later, Afghanistan remains a largely conservative Muslim society and members of the Ulema Council, an influential panel of clerics, protested against Rassouli's nomination in a meeting with Ghani.

"We told him that a woman cannot be a judge in capital crimes and other serious criminal issues," said Shams-ul Rahman Frotan, a panel member who attended last Friday's meeting.

"Ghani's decision is a big mistake. Under Islam, a woman can only be a judge in small family affairs," said Qazi Nazir Hanifi, a lawmaker from the western province of Herat, who vowed to vote against the confirmation.

Rassouli declined to comment before the parliamentary vote. Ghani's spokesman could not be reached on Thursday, the first full day of the Muslim fasting month of Ramadan.

However, the Afghan parliament's own future is in question, since its five-year mandate officially expires next week after elections for new lawmakers, due in April, were delayed indefinitely.

Some politicians and analysts expect Ghani to introduce several nominees, including his defence minister and Rassouli, during the parliament's last official days, in exchange for his support in extending the lawmakers' mandate.