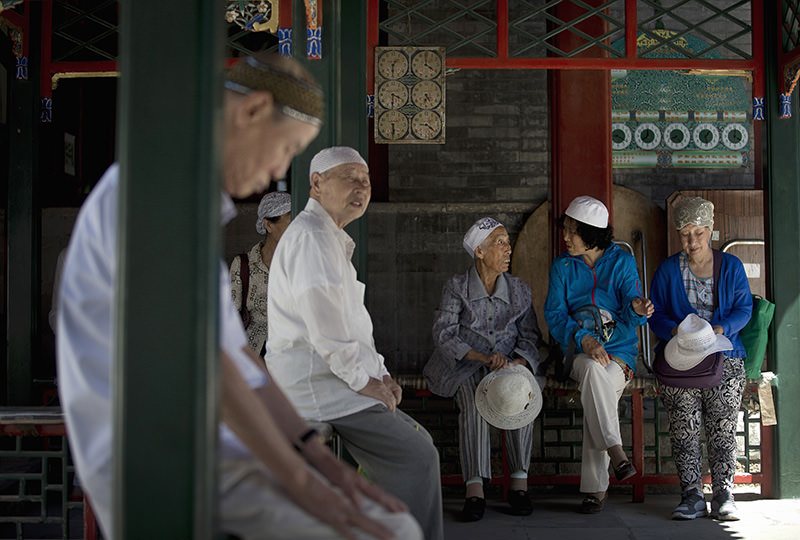 Chinese Muslim chat outside the worship hall on the first day of the Muslim holy month of Ramadan at the Niujie Mosque, the oldest and largest mosque in Beijing, China Thursday, June 18, 2015 (AP Photo)
by Cihangir Yıldırım Jun 18, 2015 12:00 am
China has banned civil servants, students and teachers in the Xinjiang Uighur Autonomous Region, a province with a large Muslim population in the northwest also known as East Turkestan, from fasting during Ramadan and has ordered restaurants to stay open.

Uighur rights groups say Chinese oppression of Muslims in Xinjiang is on the increase, especially during Ramadan. Public servants are banned from attending Ramadan iftar meals. According to local sources, if Muslims break the rule, they face the risk of losing their jobs. Officials force Muslim-run restaurants to remain open all day during Ramadan. "China's goal in prohibiting fasting is to forcibly move Uighurs away from their Muslim culture during Ramadan. Policies that prohibit religious fasting is a provocation and will only lead to instability and conflict," spokesman for the exiled World Uyghur Congress, Dilxat Rexit, said. Exiled Uighur groups and human rights activists say the Chinese government's repressive policies in Xinjiang, including restrictions on religious practices, have provoked unrest, allegations Beijing denies.

In addition to the ban on fasting, China has ordered restaurants to stay open all day during Ramadan. Shops and restaurants owned by Muslins have also been ordered to continue selling cigarettes and alcohol during Ramadan. "Food service workplaces will operate normal hours during Ramadan," a notice posted on the website of the state Food and Drug Administration said. China has rejected criticism over the fasting ban and says it faces a "terrorist threat" in Xinjiang, with officials blaming "religious extremism" for growing violence in the region.

Uighurs have long suffered from human rights abuses, with 26.3 million people being killed between 1949 and 1965 and 8.7 million people since 1965. About 35 million people have died because of the Chinese army's oppression or famine. Wearing a headscarf in public, including on public transportation and when getting married in a religious ceremony, were banned in 2014, with fines of about $353 for wearing a headscarf in public. Radical behavior is banned and the Chinese define not drinking alcohol, not smoking and avoiding eating non-halal food as radical behavior. According to a Uyghur Human Rights Project report, 700 people were killed due to political activities last year. The number of those arrests increased 95 percent compared to the previous year, reaching 27,000. The number of those sentenced to execution or life imprisonment increased 50 percent in the last six months. Chinese officials continue to censor media in the region as in other parts of China, with no freedom of the press.

The Xinjiang Uighur Autonomous Region is located in northwest China. In the early 20th century, Uighurs used the name East Turkestan as an appellation for the whole of Xinjiang. Some Uighurs reject the name Xinjiang since China aims to destroy the historical Uighur heritage by changing the names of cities. Xinjang in Chinese means "New Frontier." Some Uighurs prefer to use East Turkestan to emphasize their connection to other westerly Turkic groups as popularized by the early Soviet Union.
Last Update: Jun 18, 2015 2:48 pm
RELATED TOPICS