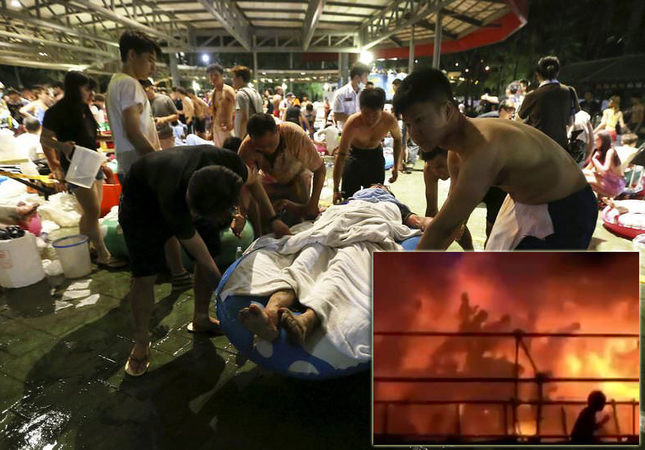 The bottom right is from video footage provided by Apple Daily from reader Miss Huang, showing revelers being engulfed by flames at the Formosa Fun Coast water park in Pali district, in New Taipei City, on June 27, 2015.

More than 200 people were injured, over 80 of them seriously, after a fire on a music stage spread into a crowd of spectators at a party on Saturday night at a water park outside Taiwan's capital Taipei.

An accidental explosion of an unknown powder set off the fire near the stage in front of about 1,000 spectators, said Wang Wei-sheng, a liaison with the New Taipei City fire department command center.

Wang said 83 people had serious injuries and 131 others have light injuries.

The blast happened as hundreds were reported to have gathered for an event at the coastal Formosa Fun Coast waterpark, just outside the capital Taipei.

Television images showed the stage on fire and crowds running away some of them only dressed in swimwear and covered in coloured powder.

The fire was quickly brought under control , officials said.
Media reports said some victims had suffered burns to more than 40 percent of their bodies.

Fire agency officials said it had been difficult for ambulances to access the site with many having to be carried away on stretchers.
"We feel sad and regretful about the accident," New Taipei Mayor Eric Chu told reporters.

"I've ordered the park to shut down immediately and be placed under a rigorous investigation."

It wasn't clear if the colored powder was part of a performance. The cause of the fire is being investigated.