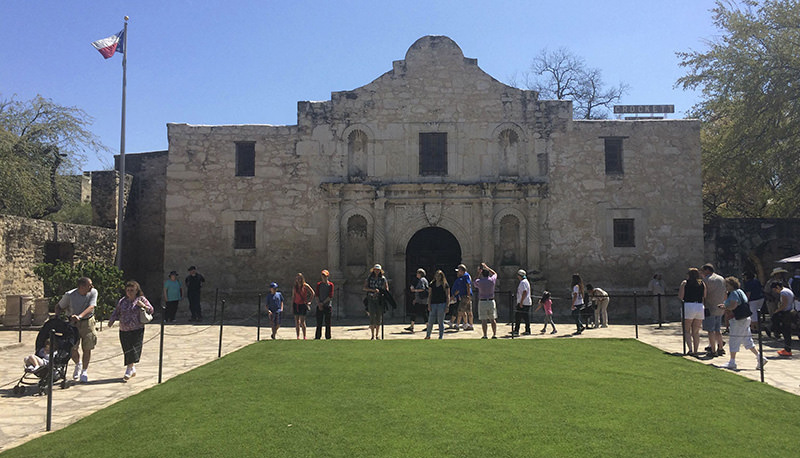 by Associated Press Jul 05, 2015 12:00 am
The United States has succeeded in its bid to "Remember the Alamo," after the U.N. cultural body approved its status as a world heritage site Sunday.

The Alamo was one of five Spanish Roman Catholic sites, known as the San Antonio Missions, to receive the coveted label likely to boost tourism.

UNESCO's World Heritage Committee approved the Missions' status along with more than a dozen others from around the globe, including the Gunkanjima industrial site off Japan that South Korea had long objected to.

Susan Snow, an archaeologist for San Antonio Missions National Historical Park, said the site in Texas represents "the very essence of the great melting pot of the United States."

"These Missions are a living example of the interchange of cultures bringing together the indigenous, Spanish, Mexican, and other influences that form South Texas today," Snow said in a statement following the decision in Bonn, Germany.

The Missions were built in the 18th century in and around what is now the city of San Antonio to convert indigenous people to Catholicism and make them Spanish subjects.

The best known of the missions, The Alamo, was the site of the famous 1836 battle when an outnumbered band of Texas settlers staged a courageous stand before Gen. Antonio Lopez de Santa Anna and his Mexican forces seized the mission. During the Battle of San Jacinto weeks later, then-victorious Texas soldiers shouted, "Remember the Alamo!"

U.S. officials hope the designation will boost tourism to San Antonio, already one of the city's top five industry and responsible for one in eight jobs.

The Missions were the only sites in the United States proposed for world heritage status this year. Other American icons already on the list include the Statue of Liberty and the Grand Canyon.

In another decision, Japan received world heritage status for a collection of almost two dozen sites that illustrate the country's industrial revolution during the 19th century.

The unanimous vote in favor of Japan's bid was approved only after Tokyo and Seoul resolved a spat over whether to acknowledge the sites' history of wartime forced labor, particularly that of Gunkanjima, or Battleship Island.

The fortress island near Nagasaki was key to Japan's rapid development during the 1868-1912 era of the Meiji Emperor, who sought to catch up with Western colonial powers.

Until recently, Seoul had objected to the listing unless the role of Korean prisoners forced to work there during World War II was formally recognized.

"Japan is prepared to take measures that allow an understanding that there were a large number of Koreans and others who were brought against their will and forced to work under harsh conditions in the 1940s at some of the sites," the Japanese delegation said in a statement after the decision.

More than a dozen other sites have also been granted world heritage status in recent days. They include:

The Burgundy vineyards south of Dijon, France, which have been shaped by centuries of wine making. Along with surrounding villages and the historic center of Dijon, the site represents an industry in existence since at least the 12th century.

Champagne, the sparkling wine distinctive of the eponymous French region, represented in the vineyards, the cellars where the bottled wine ferments a second time, and the storied sales houses.

The Diyarbakir Fortress and Hevsel Gardens of Turkey, which goes back to ancient Greek and Roman times.

The Par Force Hunting Landscape northeast of Copenhagen, a sculpted woodland where Danish kings hunted with hounds until the 18th century.

A Lutheran church settlement known as Christiansfeld, also in Denmark. Founded in 1773 in the region of South Jutland, the town was built around a central church square to represent the democratic ideal of this Protestant denomination.

Tusi sites in southwest China, named after the tribal chiefs who ruled there from the 13th to the early 20th century.

The archaeological mounds and Ardeshir's palace along the Shavur River in Iran. Known as Susa, the site was continuously settled from the 5th century B.C. until the 13th century.

The Maymand valley region of central Iran inhabited by semi-nomadic people who move between mountain pastures and caves depending on the season.

Singapore's Botanical Gardens, which were created in 1859 and have since become a world-class conservation and research site, as well as a major tourist attraction for the city state.

Sicilian churches and palaces dating back to the island's 12th-century Norman rule, which incorporated Arab and Byzantine culture.

Christian pilgrimage sites in modern Jordan where Jesus is said to have been baptized, along with Roman and Byzantine remains in the area.

Hamburg's Speicherstadt district, a vast complex of red-brick warehouses built between 1883 and 1927 in Germany's biggest port.

The Rjukan-Notodden industrial site in Norway, built in the early 20th century to produce fertilizer to meet the booming demand from agriculture.

The Necropolis of Beth She'arim, a series of catacombs built from the 2nd century B.C. onward as a Jewish burial place. Located southeast of Haifa, Israel, the site features inscriptions in Greek, Aramaic and Hebrew.

Scotland's Forth Bridge, completed in 1890 to carry trains over the Forth River and still in use today.

The Blue and John Crow Mountains, Jamaica's first world heritage site. Located on the southeast of the island, they became a refuge for indigenous people and escaped African slaves during colonial times and are considered a biodiversity hotspot.