Protests against China continue on 6th anniversary of Urumqi riots 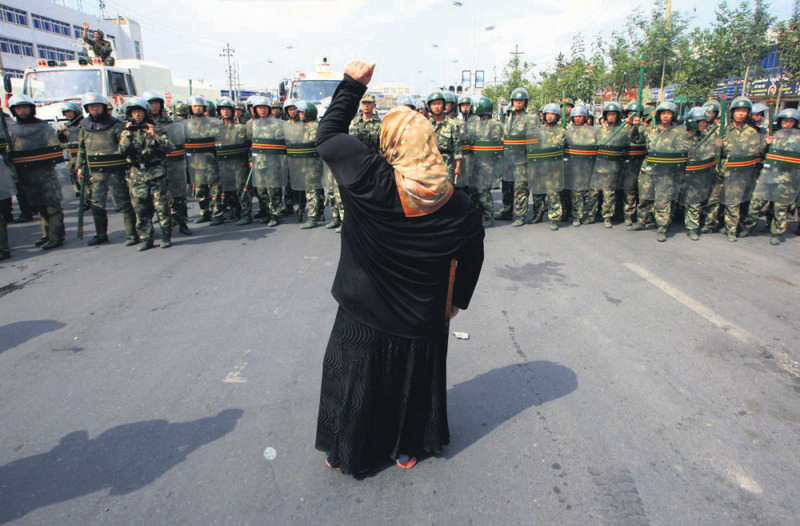 While outrage against the Chinese government's oppression in Xinjiang continues in Turkey, Uighurs mark the anniversary of the riots that took place in Urumqi six years ago, which left as many as 184 dead

Thousands of Turkish people gathered to protest China's harsh restrictions, including a ban on fasting imposed on Uighurs during the Islamic holy month of Ramadan outside the Chinese Consulate in Istanbul on the sixth anniversary of the Urumqi riots. The crowds, predominantly male with some women and children, carried East Turkestan flags and chanted: "Turkey, don't sleep, protect your brothers." Marchers carried banners reading: "Don't buy Chinese products" and "Murderer China, get out of Turkestan." The demonstrators, including fan groups from the city's Beşiktaş and Galatasaray football teams, left a black wreath at the consulate, where police provided tight security. Before marching to the consulate, the demonstrators set fire to a Chinese flag.

Protests across Turkey began with a loud march, press releases and funeral prayers for those who have lost their lives under Chinese oppression. Slogans such as "long live hell for torturers," "silence is consent, wake up and raise your voice" and "we stand with East Turkestan" were shouted. The protesters also carried placards and sky blue flags of East Turkestan along with Turkish flags. #FreeEastTurkestan and StopTerrorismInChina hashtags remain the top trending topics for Turkey.

Hundreds of people continue to protest in Istanbul against China's persecution of its minority Uighur community. Korean tourists were attacked by an unruly mob thinking that they were Chinese during one of the anti-China protests in Istanbul's Sultanahmet district. Because of the attack, China warned its citizens in Turkey to stay away from anti-Beijing protests, as protesters again took to the streets to voice their anger at China's discrimination against Uighurs. A notice on the website for the Chinese Embassy in Ankara called on its citizens to not approach, film or photograph the protests and "reduce individual outings."

There was a series of violent ethnic riots over several days that broke out on 5 July 5, 2009 in Urumqi, the capital city of the Xinjiang Uyghur Autonomous Region, also locally known as East Turkestan. On June 26, 2009, two Uighur workers at a toy factory were beaten to death by Chinese workers in Shaoguan, Guangdong, but according to eyewitnesses, the number of deaths was 20. Then, tens of thousands of Uighurs hit the streets led by university students. Chinese security forces fired into the crowd to disperse the protestors on July 5, 2009. According to Chinese media, 184 people were killed and 1,680 were wounded in Urumqi. Some 1,400 Uighurs were also arrested. But according to Uighur sources, at least 1,000 people were killed. Moreover, World Uighur Congress (WUC) President Rebiya Kadeer claimed that the number of deaths was 3,000. The U.N. Office of the High Commissioner for Human Right (OHCHR) expressed its concern about the incidents in Xinjiang. The EU and the Organization of the Islamic Conference (OIC) called on the parties to stay calm. Also, statements from the U.S., France and Russia were not effective. The Turkish Prime Ministry described the events as "savagery" and called on the international community to demand that those responsible be put on trial. Calls by Amnesty International and Human Rights Watch to investigate the events were left unanswered by Chinese officials.

China says its constitution guarantees religious freedom, although it is little seen in Xinjiang where Uighurs, a majority Muslim Turkic-speaking community, who are civil servants, teachers or students are allegedly banned from fasting and other practices during Ramadan. In response to Turkey, a spokeswoman for China's Ministry of Foreign Affairs, Hua Chunying, said that the Chinese government had noted Turkey's concerns and wanted clarification. "All ethnic groups in China are entitled to freedom of religious belief under the Chinese constitution," she said.

Human rights groups, including Amnesty International and Human Rights Watch have frequently reported that Beijing is not allowing religious freedom and ethnic liberties as well as basic human rights in ethno-religious minority regions. "In the Xinjiang Uighur Autonomous Region, the authorities stepped up already harsh restrictions on Islam with the stated aim of fighting "violent terrorism and religious extremism." Numerous counties posted notices on their websites stating that students should not be permitted to observe Ramadan, and many teachers gave food and sweets to children to ensure that they did not observe the fast ..." Amnesty International said on its 2014-2015 Human Rights Report regarding religious freedom in China.

Kadeer, who was previously forced to flee Xinjiang to the U.S., has recently spoken in a video message at the conference, "Turkic World Issues and East Turkestan," in which she accused China of being a "terrorist'" state. "The Chinese government has imprisoned youth under the age of 35. More than 40,000 administrative people from the Uighur community have been imprisoned," Kadeer said. She also accused Beijing of waging an "unnamed war against Muslims and Islam." "Unfortunately the world is still keeping silent," WUC Vice President Seyit Tümtürk said. "China's goal in prohibiting fasting is to forcibly move Uighurs away from their Muslim culture during Ramadan. Policies that prohibit religious fasting are a provocation and will only lead to instability and conflict," WUC spokesman Dilxat Rexit said.

Uighurs have long suffered ethnic discrimination, oppressive religious controls and continued poverty and joblessness in Xinjiang despite China's statements to the contrary. China's ruling Communist Party last year launched an "anti-terror" campaign in Xinjiang following a string of deadly attacks blamed by Beijing on Uighurs seeking to establish an independent state. China has banned civil servants, students and teachers in Xinjiang, a northwestern province with a large Muslim population, from fasting during Ramadan. In addition to the ban on fasting, China has ordered restaurants to stay open throughout the day during Ramadan. "Food service workplaces will operate normal hours during Ramadan," a notice posted on the website of the state Food and Drug Administration said. China has rejected criticism over the fasting ban and says it faces a "terrorist threat" in Xinjiang, which officials blame on "religious extremism" for growing violence in the region. Uighurs have long suffered from human rights abuses, with 26.3 million people having been killed between 1949, when China took over the region, and 1965, and 8.7 million people since 1965. About 35 million people have died because of the Chinese government's oppression or famine. Wearing a headscarf in public, including on public transportation and when getting married in a religious ceremony, was banned in 2014, with fines of about $353 for wearing a headscarf in public. Radical behavior is banned, which the Chinese government defines as not drinking alcohol, not smoking and avoiding eating non-halal food. According to a Uyghur Human Rights Project report, 700 people were killed due to political activities last year. The number of those arrested increased 95 percent compared to the previous year, reaching 27,000. The number of those sentenced to execution or life imprisonment has increased 50 percent in the last six months. Chinese officials continue to censor media in the region, as in other parts of China.
Last Update: Jul 07, 2015 1:24 pm
RELATED TOPICS