Volcano erupts mildly in Indonesia’s Bali, airport closes for a while 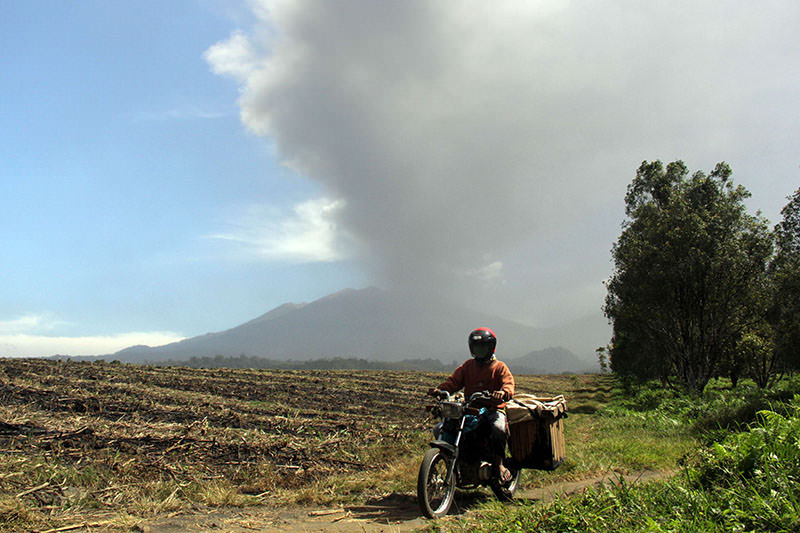 A resident leaves a village in Banyuwangi on July 12, 2015, as the 3,300-metre (10,800-foot) Mount Raung volcano emits a column of ash and steam as seen from Banyuwangi, located in eastern Java island (AFP Photo)
by Jul 12, 2015 12:00 am
Indonesian authorities reopened the airport in Bali on Sunday after halting all flights for seven hours due to the threat posed by spewing ash from a volcano in the neighboring province of East Java.

The eruption of Mount Raung has caused disruptions at Ngurah Rai in Bali, along with other regional airports, stranding passengers as hundreds of domestic and international flights were delayed or cancelled.

After closing from 9:30 am to 3:30 pm on Sunday, a Transportation Ministry spokesman told dpa the Bali airport had reopened but that its operations were limited to one runway.

Mount Raung has been ejecting ash and erupting mildly since June.

The latest eruptions forced the closure of airports in Lombok, Bali, Jember and Banyuwangi, the last of which remained out of service on Sunday.

The volcano created travel chaos as the country was entering the peak period at the end of Ramadan, when millions of Muslim Indonesians prepare to travel during Eid celebrations next week.
Last Update: Jul 12, 2015 12:43 pm
RELATED TOPICS