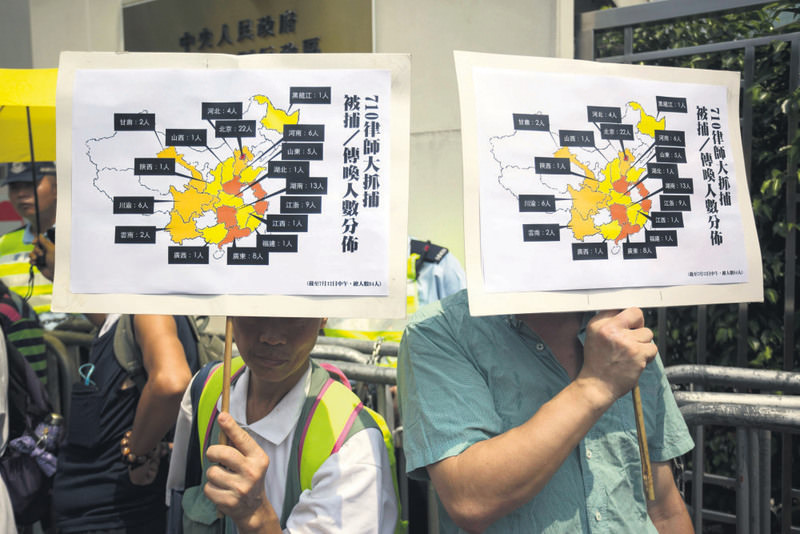 by Daily Sabah with Wires Jul 14, 2015 12:00 am
Chinese authorities have widened a crackdown on human rights groups, detaining or questioning more than 146 human rights lawyers, civil activists and their relatives, in a sweep over the past few days, the China Human Rights Lawyers Concern group said on Tuesday.

The Public Security Ministry identified the lawyers as a "major criminal organization" and accused them of disrupting public order, seeking illegal profits, illegally hiring protesters and trying to unfairly influence the courts, Xinhua said, saying there have been more than 40 such controversial incidents since July 2012 and rights groups expressed growing concern over the arrests.

Most of those detained and questioned were lawyers while the others were activists or other law firm employees, according to Amnesty International's research. The crackdown appears to target lawyers who have criticized China's Communist Party-controlled legal system and used social media to voice their opinions. The wave of arrests began after Wang Yu, a lawyer at Fengrui firm, went missing early Thursday. Yu had defended clients such as Uighur economist Ilham Tohti, who has been sentenced to life imprisonment, and activist Cao Shunli, who died in prison last year. More than 100 Chinese lawyers issued a joint statement on Friday to protest against Wang's arrest. Many of them have since been detained, rights groups said. The United States state department condemned the detentions, and in a statement called for the release of what it called lawyers "seeking to protect the rights of Chinese citizens." Several media outlets depicted the lawyers as a group of self-promoters intent on spreading rumors and arranging protests outside court venues. The official state Xinhua news agency said lawyers should uphold the law, not engage in "rabble-rousing" and "mob rule." The Ministry of Public Security did not respond immediately to requests for comment.

"The government is very concerned about activists' growing influence and their ability to use social media to drum up public support," said William Nee, a Hong Kong-based China researcher at Amnesty International. "They see the agenda-setting process is getting away from them."

Citing the need to buttress national security and stability, President Xi Jinping's administration has tightened government control over almost every aspect of civil society since 2012. In recent years, the government has detained dozens of Chinese for dissent and Tibetans and Uighurs have complained of rights abuses, prompting criticism from the United States. It was unclear whether the lawyers and activists will be charged with any crimes. Amnesty's China researcher William Nee said the arrests could be connected to a sweeping national security law approved by China's legislature this month. The new law could lead to additional crackdowns on civic freedoms, UN human rights chief Zeid Ra'ad Al Hussein said in Geneva last week. Hussein said the law does not properly define what constitutes a security threat. "As a result, it leaves the door wide open to further restrictions of the rights and freedoms of Chinese citizens, and to even tighter control of civil society by the Chinese authorities than there is already." It is the largest crackdown on lawyers since 2011, Amnesty International said.
Last Update: Jul 14, 2015 10:13 pm
RELATED TOPICS