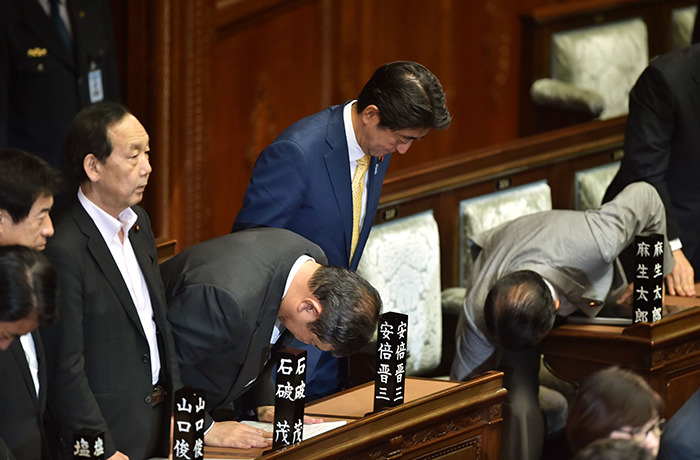 Japan's Prime Minister Shinzo Abe (3rd R) and his cabinet members react after passing controversial security bills during a lower house plenary session at the parliament in Tokyo (AFP Photo)
by Anadolu Agency Jul 16, 2015 12:00 am
Japan has pushed controversial security bills through its House of Representatives that move the country a step closer to approving legislation that would allow its Self-Defense Forces to fight overseas for the first time since the end of World War II.

The bills will now be sent to the House of Councillors for further deliberations.

Kyodo reported that the proposals would allow the country to increase contribution to international peacekeeping efforts and defend allies under armed attack to cope with new security environments.

It listed these as "a rising China and a nuclear-armed North Korea."

Those opposing the bills - including around 100,000 people reported to have gathered outside of parliament Wednesday - have argued that by exercising the right to collective self-defense the country would violate its war-renouncing constitution.

The constitution - imposed on the country after World War II - does not allow Japan to maintain a military, and only allows it to defend itself if facing direct attack.
Last Update: Jul 16, 2015 9:51 am
RELATED TOPICS