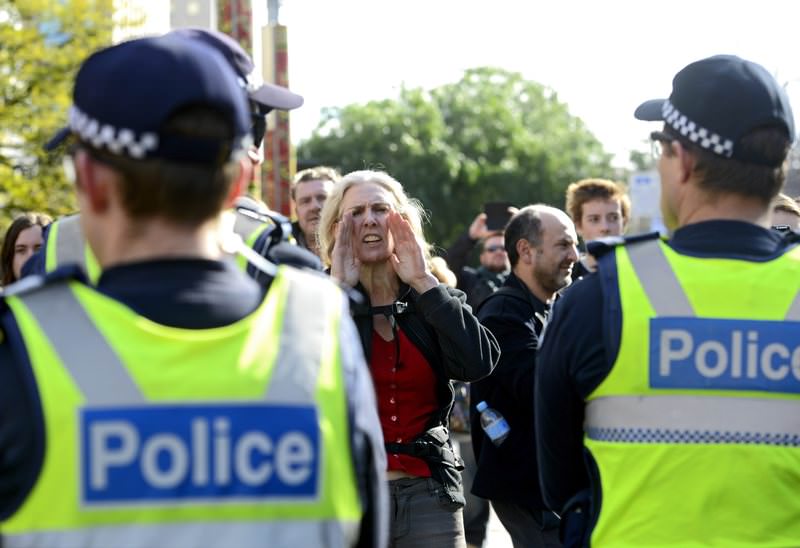 by Daily Sabah with AA Jul 18, 2015 12:00 am
Hundreds of police were deployed in Australia on Saturday to break up violent protests near Parliament House in Melbourne after demonstrators from a right wing anti-Islam group faced off against anti-racism groups.

The pre-arranged demonstrations were the first expected by "Reclaim Australia" across Australia this weekend.

Local newspaper The Age reported that the group of around 100 people had only just begun its rally at 11 a.m. when the counter-demonstrators attempted to breach police lines.

Police on horseback utilised pepper spray and hundreds of uniformed officers in a bid to control the protests.

Mike Holt, head of "Reclaim Australia" affiliate "Restore Australia" told the crowd that the protest was against the "creeping Islamization of Australia".

"This is a chance to tell people that there can be a different way... this is about keeping Australia, Australian," The Age reported.

Thousands of anti-Islam and anti-racism protesters also clashed in angry rallies around Australia on April 4.

The most violent clash in April was in Melbourne, Australia's second-largest city, where police struggled to separate 3,000 opposing demonstrators.

Reclaim Australia, an anti-Islam group, had organized rallies in 16 cities and towns around Australia at the time.