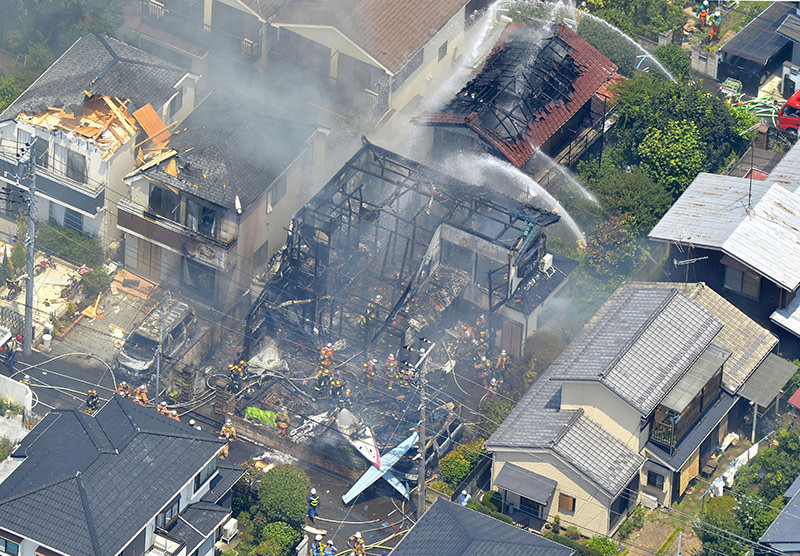 Firefighters investigate the site of a plane crash in the suburbs of Tokyo, Sunday, July 26, 2015. (Kyodo News via AP)
by Jul 26, 2015 12:00 am
A light plane crashed into a residential area of Tokyo Sunday, setting fire to several houses and reportedly killing three people and injuring five others, according to officials and local media.

The aircraft with a 36-year-old pilot and four passengers on board crashed at around 11:00 am (0200 GMT) shortly after take-off from Tokyo's Chofu airport, public broadcaster NHK reported.

"Four people were involved in the accident and three of them were rescued, but we don't know about further details, including their condition," a spokesman at the Tokyo Fire Department told AFP.

NHK, quoting police, said two people on board and one female local resident were killed in the accident, while five others were injured.

Jiji Press said the two casualties aboard were the pilot and a male passenger.

Immediate confirmation of the reports was not available.

A female witness told AFP: "First, I thought a large truck had crashed into a neighbouring house as I heard the rumbling of the earth. I then saw ferocious smoke."

At least three houses and two cars were on fire in the residential district of Chofu only some 500 metres (yards) from the airport.

The crash also damaged the roofs of other houses nearby, according to the spokesman and local media.

"I thought it was flying quite low and then I heard a bang," a local resident who witnessed the crash told NHK.

Television footage showed firefighters battling the inferno, as well as the remains of the plane's tail that had squashed a car.

It also showed flames engulfing one of the houses and the plane's front fuselage as black smoke rose from the crash site near a school, a baseball stadium and a shopping arcade.

"This place is close to the airport but I'm surprised because I had never thought that an airplane would crash," an 82-year-old woman told NHK.

The single-engine propeller-driven aircraft was bound for Izuoshima island in the Pacific some 100 kilometres (60 miles) south of central Tokyo for a one-day training flight, local media said.

"I have lived here for a long time and get used to the noise of light planes, but it was obviously abnormal," Kotaro Sunaga, a 32-year-old businessman, told Jiji Press.

Police have launched an investigation into the accident on suspicion of professional negligence resulting in death, local media said.
Last Update: Jul 26, 2015 10:16 am
RELATED TOPICS