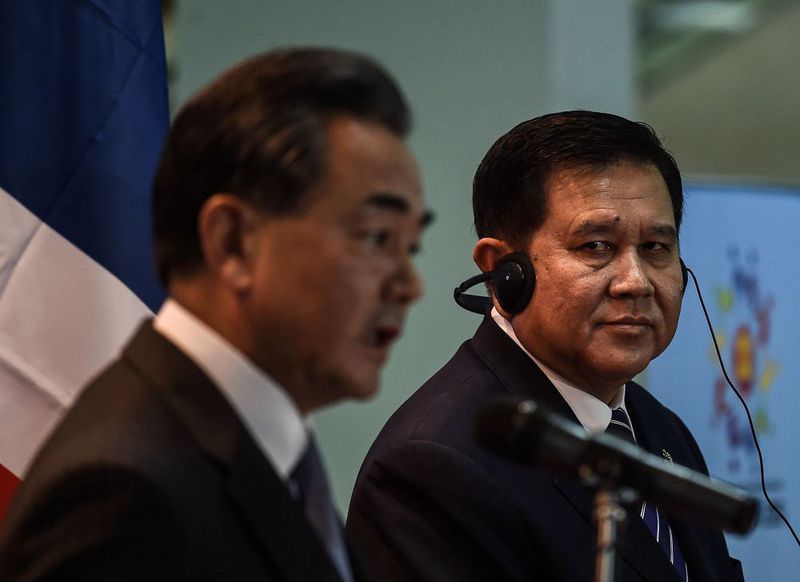 by Daily Sabah with AFP Aug 06, 2015 12:00 am
As relations with western nations cool, Thailand's generals have visibly cozied up to China since seizing power in a coup last year. But one Thai general appears to be especially enamored. At a joint press conference in Kuala Lumpur yesterday, Foreign Minister General Tanasak Patimapragorn made a surprise declaration while standing on a podium with his Chinese counterpart Wang Yi.

"If I were a woman I would fall in love with his excellency," he told reporters in English, much to the surprise of China's top foreign envoy who appeared somewhat unsure how to respond. The foreign ministers are currently attending a regional security meeting in Malaysia hosted by the 10-nation Association of Southeast Asian Nations (ASEAN).

General Tanasak, a close confidant of coup leader and now Prime Minister Prayut Chan-o-Cha, made his remarks in response to a reporter's question on Thailand's diplomatic relations with China. "At this moment we believe this is the best time for our relationship. Especially for my personal contact with minister Wang Yi who is a very nice and polite person," he said.

It was then that he made his surprise declaration of love. While Thailand boasts extensive cultural, ethnic and demographic links to China, its relationship has not always been so easy. Throughout much of the Cold War the kingdom was one of Washington's strongest bulwarks against communism and it has traditionally remained a close regional ally of the United States.

But the latest coup, one of more than a dozen successful power grabs by the military since the end of absolute monarchy in 1932, has soured relations with the U.S. In contrast Beijing has been quick to embrace Bangkok's new military rulers, with a flurry of high-level meetings since the May 2014 coup.

Tanasak said Thailand's relationship with China goes back more than 1,000 years. "Let's say we are so close, we are more than friends, just say we are cousins with a long history together," he said. "We don't talk diplomatic talk, we talk personal, like family, like friend," he added. Or even lovers.

In May 2014, the army announced that it was taking control of the country and suspending the country's constitution. Thailand's military government has severely repressed fundamental rights and freedoms since the coup, Human Rights Watch (HRW) said in its World Report 2015. In response to calls from the U.N. and many concerned governments to respect rights and transition to a civilian government, HRW also raised serious concerns regarding the use of arbitrary arrest and secret military detention in Patani province. Recently, the Thai military government has rejected the demand of 17 students about head scarfed women receiving an education.
RELATED TOPICS