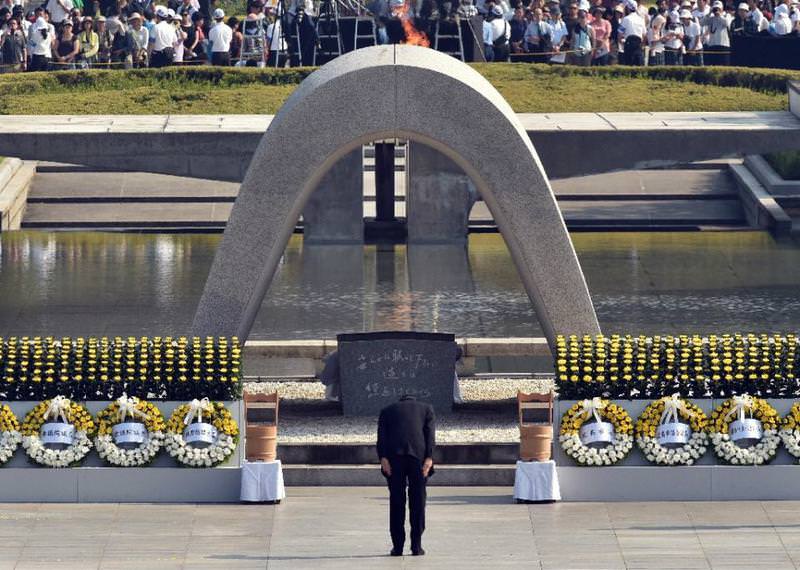 Japanese Prime Minister Shinzo Abe bows in front of a memorial for victims of the 1945 atomic bombing during a ceremony to mark the 70th anniversary, at the Hiroshima Peace Memorial Park.
by Daily Sabah with Wires Aug 07, 2015 12:00 am

Japan commemorated the 70th anniversary of the atomic bombing by the U.S. that killed more than 140,000 within the immediate bombing and 160,000 others from radiation-related illnesses as well as destroyed almost the entire city

Japan marked the 70th anniversary of the atomic bombing of Hiroshima on Thursday, with Mayor Kazumi Matsui renewing calls for U.S. President Barack Obama and other world leaders to step up efforts toward making a nuclear-weapons-free world. Tens of thousands of people stood for a minute of silence at 8:15 a.m. at a ceremony in Hiroshima's peace park near the epicenter of the 1945 attack, marking the moment of the blast. Then dozens of doves were released as a symbol of peace. The U.S. bomb, "Little Boy," the first nuclear weapon used in warfare, killed 140,000 people. A second bomb, "Fat Man," dropped over Nagasaki three days later, killed another 70,000, prompting Japan's surrender during World War II. The U.S. dropped the bombs to avoid what would have been a bloody ground assault on the Japanese mainland, following the fierce battle for Japan's southernmost Okinawa Islands, which took 12,520 American lives and an estimated 200,000 Japanese, about half of which were civilians.

Matsui called nuclear weapons "the absolute evil and ultimate inhumanity" that must be abolished, and criticized nuclear powers for keeping them as threats to achieve their national interests. He said the world still bristles with more than 15,000 nuclear weapons. He renewed an invitation to world leaders to visit Hiroshima and Nagasaki to see the scars themselves, during the G7 summit in Japan next year. "President Obama and other policymakers, please come to the A-bombed cities, hear the hibakusha [surviving victims] with your own ears and encounter the reality of the atomic bombings," he said. "Surely, you will be impelled to start discussing a legal framework, including a nuclear weapons convention."

The anniversary comes as Japan is divided over Prime Minister Shinzo Abe's push to pass unpopular legislation to expand the country's military role internationally, a year after his cabinet's decision to loosen Japan's war-renouncing constitution by adopting a new interpretation of it. "We must establish a broad national security framework that does not rely on the use of force but is based on trust," Matsui said. He urged the Japanese government to stick with "the pacifism of the Japanese Constitution" to lead the global effort of nonproliferation. Abe, also addressing the ceremony, said that as the sole country to face a nuclear attack, Japan had a duty to push for the elimination of nuclear weapons. He pledged to promote the cause through international conferences to be held in Hiroshima later this month.

With the average age of survivors now exceeding 80 for the first time this year, passing on their stories is considered an urgent task. There were 5,359 hibakusha who died over the past year, bringing the total death toll from the Hiroshima bombing to 297,684. U.S. Ambassador Caroline Kennedy and representatives from more than 100 countries, including Britain, France and Russia, attended the ceremony. "Little Boy," dropped from the Enola Gay B-29 bomber, destroyed 90 percent of the city. A "black rain" of radioactive particles followed the blinding blast and fireball, and the attack has been linked to higher rates of cancer and other radiation-related diseases among the survivors.

A Chinese newspaper with close ties to the ruling Communist Party slammed Japan on Thursday for commemorating the atomic bombing of Hiroshima without highlighting its own wartime aggression. The Global Times tabloid, which is published under the People's Daily newspaper, the mouthpiece of the Communist Party, conceded in an editorial that it was "understandable" for Japan to recall the bombing. "But it must be pointed out that the ceremony directs people's attention only to the fact that Japan is a victim of atomic bombing, but turns a blind eye to the reason why," the English-language editorial said. "Ceremonies like this water down the fact that Japan was also a perpetrator of war crimes. This shows how adept Japan is at scheming and calculating." Advisers to Abe agreed in a report issued on Thursday that Japan caused much damage in Asia through a "reckless war" but quibbled over the term "aggression" to describe its actions. Their report, meant to serve as a reference for Abe's statement marking the 70th anniversary of the end of World War II, covered more than 100 years of history in 38 pages. It referred to Japan's aggression in China after 1931, but noted that some advisers objected to the term because of a lack of a definition in international law and a reluctance to single out Japan when other nations had engaged in similar acts. Abe repeated on Thursday that he upholds previous statements on the war, which include a 1995 "heartfelt apology" by then-premier Tomiichi Murayama. But he has also questioned the use of the term aggression – a key phrase in the Murayama statement – and his stated desire to issue forward-looking comments in his own words has raised concerns that he wants to dilute past apologies.
RELATED TOPICS