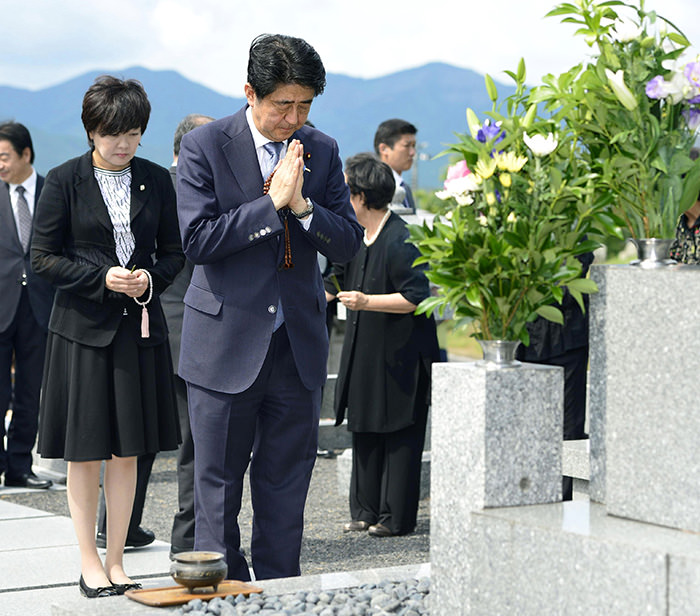 Japanese Prime Minister Shinzo Abe, accompanied by his wife Akie, left, prays at his ancestors' grave in Nagato, western Japan, Friday, Aug. 14, 2015 (Yuta Omori/Kyodo News via AP)
by Anadolu Agency Aug 14, 2015 12:00 am
A statement by Japan's prime minister on World War II transgressions has referred to the country's repeated expressions of deep remorse and apology over the past, but offered nothing new, its neighbors claim.

The statement -- issued to mark the 70th anniversary of the end of World War II -- was being watched closely worldwide, particularly by neighbors colonized by Japan during World War II.

"Japan has repeatedly expressed the feelings of deep remorse and heartfelt apology for its actions during the war," Shinzo Abe's statement said.

"In order to manifest such feelings through concrete actions, we have engraved in our hearts the histories of suffering of the people in Asia as our neighbors," it said.

Since his re-election last December there had been growing interest and speculation as to what Abe would say on occasion of the anniversary - How far will he go in recognizing, and apologizing for, Japan's aggression during the war, especially for its invasion of China and colonization of Korea - a period that was marked by brutal oppression and aggression? Will he even use the words?

In a story headlined Abe says "Japan's future generations unnecessary to keep apologizing for wartime atrocities", China's Xinhua News Agency said he had offered nothing new, while South Korea's Yonhap News underlined that the PM had made no new apology for WWII transgressions.

Abe is known for his conservative, indeed revisionist, view on history. In past writings he has stopped short of describing Japan's actions in the 1930s and 1940s as "aggression." He has appointed people to prestigious institutions that hold similarly conservative views.

He has also angered Beijing by personally paying his respects at the Yasukuni Shrine, which honors Japan's fallen soldiers but also includes 14 "Class A" war criminals accused of planning and waging "aggressive" war.

On the other hand, Abe is the steward of Japan's foreign policy, especially relations with China and South Korea who profoundly distrust him.

In 1995, on the 50th anniversary of the war's end, then Prime Minister Tomiichi Murayama issued what was supposed to be the definitive apology for Japan's actions during the war.

In it, he expressed Japan's "deep remorse and heartfelt apology" for Japan's "aggression". Ten years later on the 60th anniversary of the surrender, former premier Junichiro Koizumi repeated the words.

On Friday, Abe said "Such position articulated by the previous Cabinets will remain unshakable into the future."

Murayama recently came out of retirement to urge Abe not to inflame relations with neighbors by soft-pedaling Japan's aggression during the war.
Last Update: Aug 14, 2015 2:15 pm
RELATED TOPICS