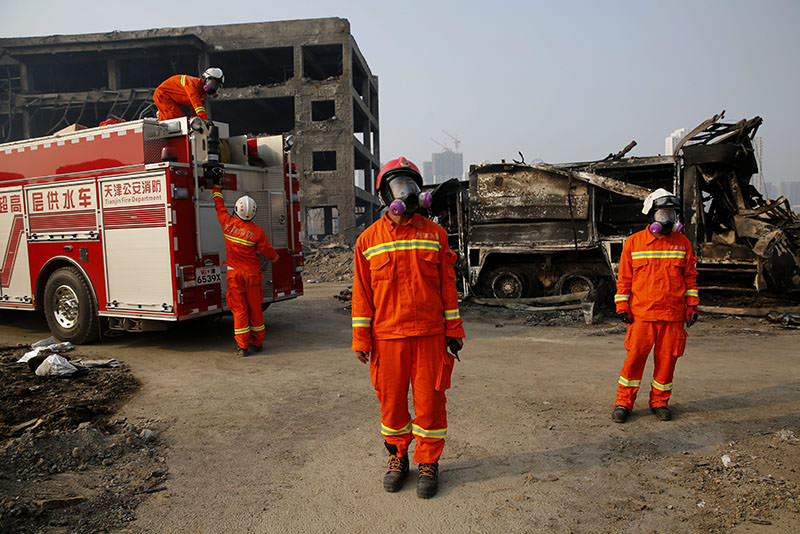 Firemen wearing gas masks search the area of a huge explosion that rocked the port city of Tianjin, China, 15 August 2015 (EPA photo)
by Aug 15, 2015 12:00 am
A chemical warehouse destroyed by explosions and a fireball in north-eastern China caught fire again Saturday after a series of fresh blasts, after which police ordered residents within a 3-kilometre radius to evacuate, state media said.

As the death toll in Wednesday's disaster in Tianjin rose to 104, investigators said unregistered containers of highly toxic sodium cyanide were possibly stored at the blast site.

Further confirmation of the contents of the warehouse was needed, Gao Huaiyou, Tianjin's deputy director of work safety, said at a press conference.

A half-dozen fresh explosions caused new fires to break out at the facility in the port city, a day after authorities had announced the fire was "basically out," the Xinhua news agency reported. Volunteers with loudspeakers told residents to leave the area, the Beijing News said.

Reports by the Beijing News and other mainstream Chinese media outlets that have since been deleted online said about 700 tons of sodium cyanide were stored in the warehouse, located about 110 kilometres south-west of Beijing.

The reports were not yet verified, Gao said.

Sodium cyanide producers have been called in to help at the site, Xinhua said, as authorities also dispatched a task force to attack the chemical with hydrogen peroxide and prevent contaminants from seeping into the city's sewage system.

Anti-chemical warfare soldiers combing the site also found a survivor Saturday. A man in his 40s was rescued from inside a shipping container 50 metres from the epicentre of the blast, China Central Television reported.

The man was found conscious and could talk when rescued. He suffered respiratory tract burns but was in stable condition after emergency treatment, Dr Li Jingmei at Tianjin No 254 Hospital told Xinhua.

At least 721 people were injured in Wednesday's explosions and fireball. Twenty-five were critically wounded and another 33 were listed in serious condition, Xinhua said.

Thirteen firefighters and an unknown number of port workers were still missing, it said. One firefighter was rescued from the ruins of the warehouse early Friday.