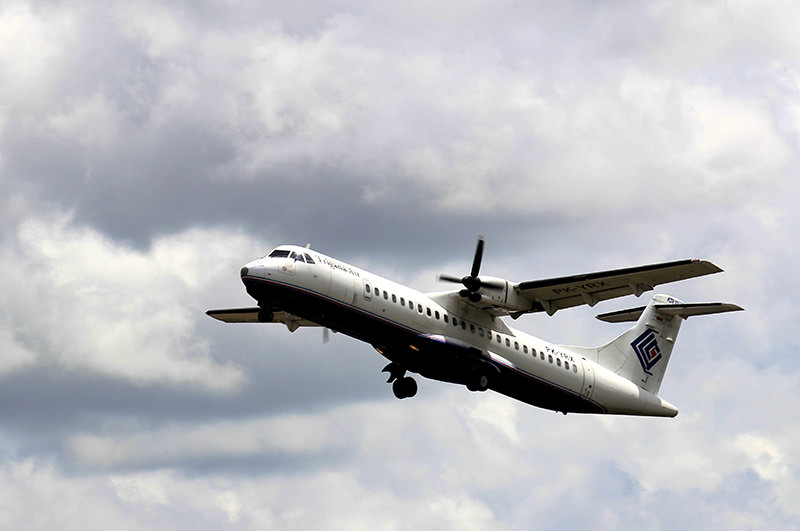 A file picture shows a plane of the Indonesian domestic airline Trigana taking off at Iskandar Military Airport in Pangkalan Bun, Indonesia. (EPA Photo)
by French Press Agency - AFP
Aug 16, 2015 12:00 am
Rescuers raced Monday to reach debris in remote eastern Indonesian mountains believed to be from a plane that crashed carrying 54 people and cash worth almost half a million dollars.

The plane operated by Indonesian carrier Trigana Air lost contact with air traffic control on Sunday afternoon in bad weather on a short flight from Jayapura, the capital of Papua province.

The ATR 42-300 twin-turboprop plane was carrying 49 passengers and five crew on the journey to Oksibil, a remote settlement in the mountains to the south of Jayapura.

Also on the plane was 6.5 billion rupiah ($470,000) in cash, which were government funds being transported by postal officials for distribution to poor families, according to the head of the Jayapura post office.

But the plane disappeared about 10 minutes before reaching its destination, soon after requesting permission to start descending in heavy cloud to land.

It is just the latest air accident in Indonesia, which has a poor aviation safety record and has suffered major incidents recently, including the crash of an AirAsia plane in December with the loss of 162 lives.

On Monday a search plane spotted debris engulfed in smoke near Oksibil and another aircraft was being sent to check. Villagers had already reported seeing the plane crash into a mountain on Sunday and spotted wreckage.

A team of rescuers, including troops and police, were heading to the area on foot but will have to battle through dense forest to reach the remote site, which is at an altitude of about 8,500 feet (2,600 metres), according to officials.

"The area is steep and is covered by dense forests... There is no road, no access at all," said Papua military spokesman Teguh Pudji Rahardjo.
There was no word yet on whether anyone might have survived the crash.

Relatives of passengers were becoming increasingly frustrated at the lack of hard news, with some shouting "We want confirmation!" and throwing a table at a crisis centre set up by Trigana Air at Jayapura airport.

"My family and I have been gathered here for hours. We want to know the fate of my brother, Kepi Deal, who was on board the plane," Rifan Wea, one of about 100 relatives at the airport, told AFP.

"We want to know whether he is dead or alive."

After the plane failed to land at the weekend, Trigana Air sent another flight over the area to hunt for it but the aircraft failed to spot anything due to bad weather.

Captain Beni Sumaryanto, Trigana Air's service director of operations, said the weather was "very unpredictable" in the area where the plane went missing and he believed bad conditions had caused the crash.

Small aircraft are commonly used for transport in remote and mountainous Papua and bad weather has caused several accidents in recent years.

Last week a Cessna propeller plane crashed in Papua's Yahukimo district, killing one person and seriously injuring the five others on board. Officials suspect that crash was caused by bad weather.

Trigana Air, a small domestic airline, has experienced a string of serious incidents and is banned from flying in European Union airspace.

Last year's AirAsia crash was one of two major air accidents that Indonesia has suffered in the past year alone.

The second incident happened in June when an Indonesian military plane crashed into a residential neighbourhood in the city of Medan, exploding in a fireball and killing 142 people.

The aviation sector in Indonesia is expanding fast as the economy booms but airlines are struggling to find enough well-trained personnel to keep up with the rapid growth.