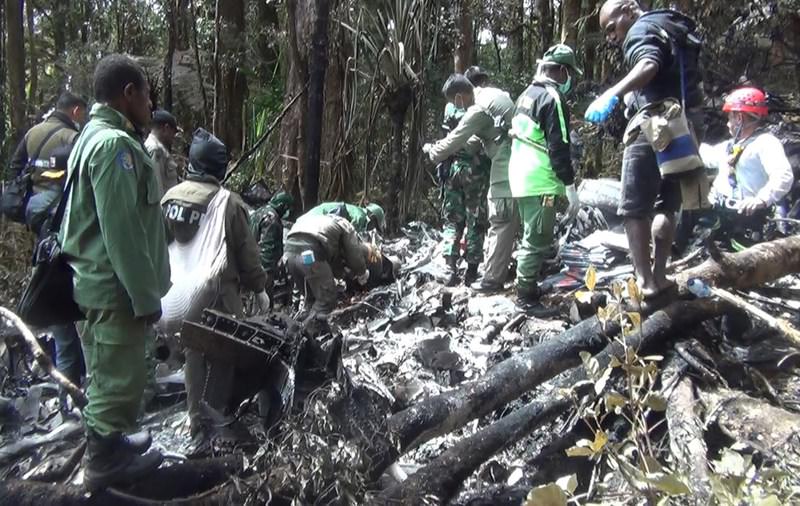 by Aug 19, 2015 12:00 am
A plane that crashed in eastern Indonesia was yesterday found "completely destroyed" with the bodies of all 54 passengers and crew strewn amid the wreckage in a fire-blackened jungle clearing, officials said. Rescuers finally reached the debris of the Trigana Air plane, which went down Sunday in Indonesia's Papua province during a short flight in bad weather, after abandoning search efforts a day earlier due to mountainous terrain, thick fog and rain. The black box flight data recorders, which could provide clues about the cause of the crash, were retrieved. Money – some of it burnt – was also found among the wreckage of the plane, which had been transporting 6.5 billion rupiah ($470,000) in cash. "The plane has crashed, it is completely destroyed," Bambang Soelistyo, head of the country's search and rescue agency, said of the ATR 42-300 plane after teams reached the site in the morning. "Everything was in pieces and part of the plane is burnt."

It is just the latest air accident in Indonesia, which has a poor aviation safety record and has suffered major disasters in recent months, including the crash of an AirAsia plane in December that included the loss of 162 lives. Photos of the site showed a fire-blackened clearing in thick jungle strewn with debris. The twin-turboprop plane was carrying 54 people – 49 passengers and five crew members – and officials said all the bodies had been found. The team of about 100 rescuers, including soldiers and police, who reached the crash site found some bodies were not intact while others were badly burnt. All those on board were believed to be Indonesians. Authorities were planning to airlift the bodies from the site by helicopter but efforts were suspended yesterday afternoon due to thick fog, Soelistyo told reporters in Jayapura, Papua's capital.

The money on the plane, which was being carried in four bags by postal officials, was government social assistance funds to be distributed to poor families in the remote community of Oksibil where the plane had been heading. Soelistyo did not say how much cash had been found, but he told reporters: "I have instructed the team there to secure all the items, including the money, to be handed over to the authorities as evidence." The plane had set off from Jayapura on what was supposed to be a 45 minute flight to Oksibil. But it lost contact with air traffic control about 10 minutes before reaching its destination, soon after the crew requested permission to start descending in heavy cloud and rain to land. Captain Beni Sumaryanto, Trigana Air's service director of operations, said "unpredictable weather and mountainous terrain" had likely caused the accident, adding that the plane was in good condition and the pilot was experienced. Small aircraft are commonly used for transport in remote and mountainous Papua and bad weather has caused several accidents in recent years.

Last week a Cessna propeller plane crashed in Papua's Yahukimo district, killing one person and seriously injuring the five others on board. Officials suspect that crash was also caused by bad weather. Trigana Air, a small, domestic Indonesian airline, has experienced a string of serious incidents and is banned from flying in European Union airspace.

Last year's AirAsia crash was one of two major air accidents that Indonesia has suffered in the past year alone. In June an Indonesian military plane crashed into a residential neighborhood in the city of Medan, exploding in a fireball and killing 142 people. The aviation sector in Indonesia is expanding fast but airlines are struggling to find enough well-trained personnel to keep up with the rapid growth on the archipelago of more than 17,000 islands.
RELATED TOPICS