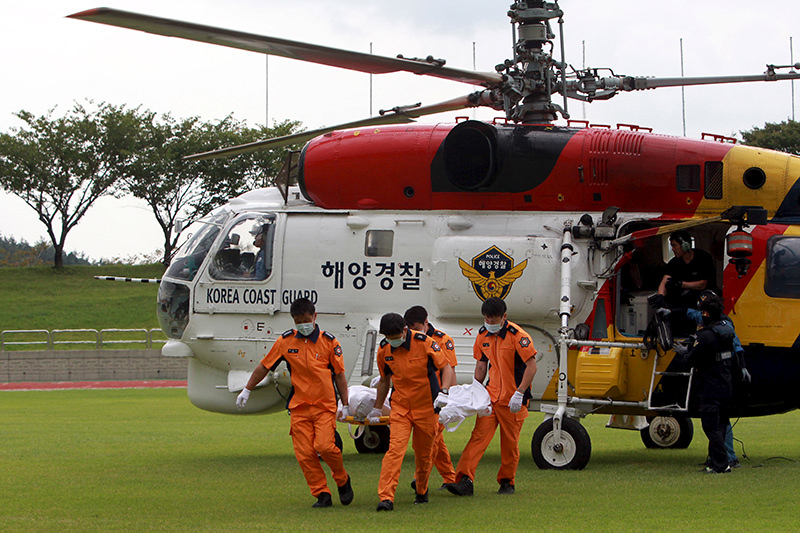 South Korean Coast Guard personnel carry the body of a passenger who was onboard a boat called Dolgorae, or Dolphin, which capsized at the sea off the southern island of Jeju in Heanam (Reuters Photo)
by Associated Press Sep 06, 2015 12:00 am
Ten people died and eight others were believed to be missing after a boat carrying passengers on a fishing trip capsized off South Korea's southern coast, officials said Sunday.

Three people were rescued and flown to a hospital with injuries that weren't life-threatening, Jeju coast guard officers said on condition of anonymity because of office rules. Dozens of ships searched the area for survivors.

The 9.8-ton boat, Dolphin, lost communication with another boat on Saturday evening and was found Sunday morning north of the resort island of Jeju.

A survivor said the boat quickly capsized after being caught by nets for fish farms, according to a coast guard statement. Coast guard officers said that the exact cause of the capsizing was still unknown, and that weather conditions at the time of the incident weren't really bad.

Another survivor, identified only by the surname Park, awoke to find the captain telling the passengers to get out as the boat filled with water, according to Yonhap news agency. Park said that some people clung to the boat for more than 10 hours, but that some disappeared in the strong waves before rescuers arrived, Yonhap said.

Twenty-one people were believed to have been on board the boat, including the captain, who was among the 10 dead. The rest were passengers on a fishing trip, not professional fishermen, according to the coast guard.

A document listed 22 expected passengers, but officials have found that four of them did not actually board the ship and three unlisted people embarked on it, the coast guard officers said.

More than 70 coast guard, navy and civilian ships searched the nearby waters along with five aircraft, the coast guard statement said. The boat had left Chuja Island, northwest of Jeju Island, on Saturday evening to return to a southwestern town on the mainland before losing communication, it said.

South Korea is still dealing with grief and anger over a maritime disaster last year that killed more than 300 people, mostly high school students, when a ferry sank off the southern coast. Critics blamed lax government oversight and the country's poor safety culture in part for that sinking.

After the latest incident, President Park Geun-hye, heavily criticized for alleged incompetence over last year's ferry sinking, ordered her government to "do everything possible for the search and rescue of the missing" and to keep the public informed about government efforts to deal with the accident, according to her office.
Last Update: Sep 06, 2015 3:49 pm
RELATED TOPICS