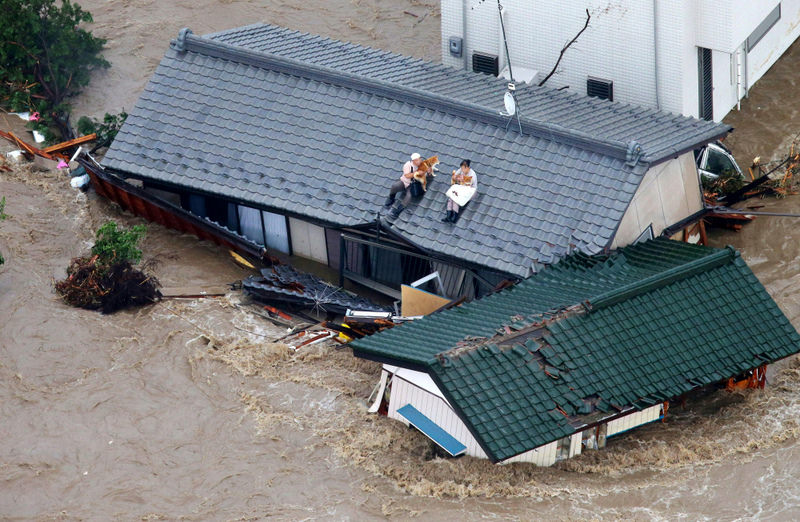 by Associated Press Sep 11, 2015 12:00 am
Raging floodwaters broke through a berm yesterday and swamped a city near Tokyo, washing away houses, forcing dozens of people to rooftops to await helicopter rescues and leaving one man clinging for his life to a utility pole.

There were no immediate reports of casualties, but rescue officials said they were overwhelmed by pleas for help. More than 30,000 people fled their homes, and hundreds more were stranded by the water. As heavy rain pummeled Japan for a second straight day, the Kinugawa River broke through a flood berm at 12:50 p.m., sending water gushing into the eastern half of Joso, a city of 60,000 people about 50 kilometers (30 miles) northeast of Tokyo.

Aerial footage showed a wide swath of cityscape underwater, more than one story deep in some places. The rains came on the heels of Tropical Storm Etau, which caused flooding and landslides elsewhere Wednesday as it crossed central Japan. Japanese broadcasters showed live aerial footage of rescuers being lowered from helicopters and clambering onto second-floor balconies to reach stranded residents.

In one dramatic scene, a rescuer descended four times from a military helicopter over 20 minutes to lift up four people one by one as a deluge of water swept around their home. Nearby, a man clung to a utility pole as the waters rose. He was taken up by a rescue worker who had to be first lowered into the rushing water so he could make his way over to the man.

Others waved cloths from their decks or roofs to get attention as torrents of water washed away cars and knocked over buildings. Photos from Japan's Kyodo News service showed people waiting for help on top of cars and a 7-Eleven delivery truck, surrounded by water that nearly submerged the cars. By evening, muddy water was still rising on a street heading to Joso City Hall, and police were blocking traffic in that direction. "Looks like this place is going to be flooded soon," said Shogo Kobayashi, a 29-year-old resident of a nearby town who came to check on friends in Joso. "I'm getting scared." Akira Motokawa, a city evacuation official, told national broadcaster NHK that rescuers have been unable to keep up with the volume of calls for help. As of 7 p.m., authorities had rescued 70 of the 176 people who had requested help. Another 100 people were reported trapped on the second floor of a flooded supermarket, and 80 more in a nursing home.

More than 31,000 people in the affected 37 square-kilometer (14 square-mile) area shelter at schools, community centers and other safer areas. Defense troops were delivering food, blankets and water to about 780 people in several communities who were stranded but not seeking rescue.

Dozens of residents had evacuated to City Hall, carrying small bags of personal items. They rested in conference rooms, and the waiting area on the first floor opened for them to stay overnight. Soldiers in camouflage uniforms and helmets rushed around, while wet uniforms and raingear hung from chairs to dry.

Tokyo was drenched with rain, but the hardest-hit area was to the north in Ibaraki and Tochigi prefectures. One woman was missing hours after a landslide hit houses at the foot of a steep, wooded incline. Bullet train service was partially suspended. The Fire and Disaster and Management Agency said 15 people were injured by Etau, including two elderly women who were seriously hurt when strong winds knocked them over.
RELATED TOPICS