Slowdown in peace process in Philippines due to ISIS-linked group 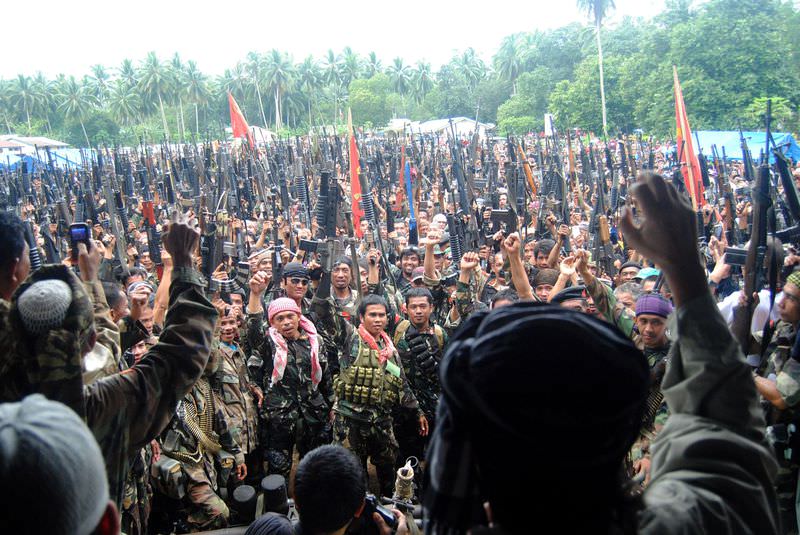 Fighters of the Moro Islamic Liberation Front vow to fight against ISIS-linked Abu Sayyaf as the group sabotages peace talks with the government.
by Cihangir Yıldırım
Oct 10, 2015 12:00 am

Since ISIS-linked groups have increased their activities, the peace process between the government and the Moro Islamic Liberation Front has come to a standstill ahead of the presidential elections

In September 2015, two Canadian tourists – John Ridsdel, 68, and Robert Hall, 50 – a Norwegian resort manager named Kjartan Sekkingstad, 56, and a Filipino woman were kidnapped by Abu Sayyaf from a popular resort island in the southern Philippines. Last week, former Italian Catholic missionary Rolando del Torchio was kidnapped by gunmen. Filipino forces have mounted a massive search for del Torchio. There has been no trace of the four. Police said that they have no information of who is behind the latest kidnappings, but Abu Sayyaf is suspected. In April 2014, Abu Sayyaf gunmen seized a German couple while they were sailing off the far south-western island of Palawan, a popular tourist destination. The German couple was released six months later, with Abu Sayyaf claiming it had received all of the $5.4 million it demanded in ransom.

After the new autonomy deal was signed in 2014, MILF started to hand over weapons in June 2015 in order to show its commitment to the historic peace agreement. Seventy-five heavy weapons, including howitzers and rocket launchers, were handed over in the presence of the president and 11,000-strong group's leader al-Hajj Murad Ebrahim. Aquino, a reformist leader whose six-year term ends in 2016, said at the ceremony that the first phase of the decommissioning of the front was a big step, showing their sincerity toward building a lasting peace. The front's members showed their commitment by attending the symbolic ceremony with 145 fighters. "As I look at the faces of each of our 145 brothers here, I see 145 stories of struggle, of pain, of hopelessness and even of death, yet I also see 145 stories of hope and faith that indeed peace is near and that all the sacrifices have been worth it," Ebrahim said. Members of the TPMT, which included Turkish ambassador Haydar Berk and Oruç, attended the symbolic decommissioning ceremony in Mindanao. Representatives from the U.S. and EU also attended the ceremony. The front's normalization process has the three main components of security, socioeconomic development and transitional justice. As part of the peace deal, the Filipino government will provide a cash handout to former fighters for education, training and livelihood.