The leaders of China, Taiwan meet for the first time in more than six decades 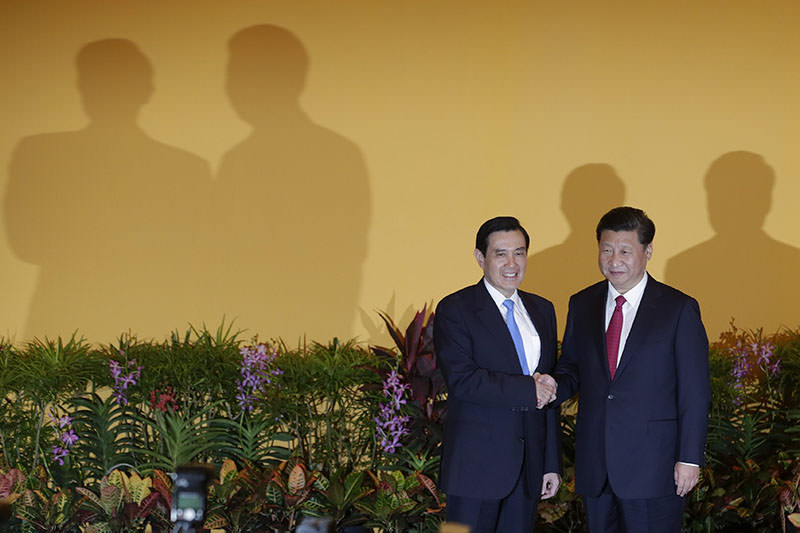 "No force can pull us apart," Xi told Ma as they opened the one-hour meeting. "We are one family."

Ma responded by telling Xi the two sides should observe mutual respect after decades of hostility and rivalry, but that the "fruits of conciliation" lay ahead.

"Even though this is the first meeting, we feel like old friends. Behind us is history stretching for 60 years. Now before our eyes there are fruits of conciliation instead of confrontation," he said.

The pair opened the encounter with an extended handshake, beaming and waving to a huge pack of assembled media.

No agreements or joint statements are expected from the encounter between two sides that still refuse to formally recognise each other's legitimacy, and the meeting's lasting significance remains to be seen.

But the encounter is undeniably historic: the previous occasion was in 1945, when Communist revolutionary leader Mao Zedong met with China's nationalist President Chiang Kai-shek in a failed reconciliation attempt.

The later Communist takeover forced Chiang's armies and about two million followers to flee to Taiwan, then a backwater island province, leaving a national rupture that has preoccupied both sides ever since.

A hostile standoff ensued for decades, and the Taiwan Strait between them remains one of the world's last remaining Cold War-era flashpoints.

Over the years, however, Chinese economic pragmatism allowed cross-strait business and investment ties to flourish despite the official hostility.

Since taking office in 2008, Ma's Beijing-friendly policies have pushed this to new heights, yielding a tourism boom, the opening of flight routes, more than 20 trade agreements -- and Saturday's summit.

But large numbers of people on Taiwan, a rambunctious democracy, are deeply uneasy at being drawn too closely into the Communist-ruled mainland orbit.
Around 100 angry demonstrators attempted to storm Taiwan's parliament building in Taipei overnight to denounce the summit.

They were stopped by police but a dozen of them staged a sit-in into Saturday morning.

Another protest was held at the capital's airport as Ma departed, with demonstrators burning images of the two leaders. The likenesses included slogans calling Xi a "Chinese dictator" and Ma a "traitor".

Police said 27 people were arrested at the airport.

The intense interest in the summit drew at least 200 journalists from Taiwan, China and international media to the luxury hotel venue where.

Tempers flared as crowds of anxious reporters clamoured for position before the handshake.

China and Taiwan still refuse to formally recognise each other's legitimacy, and Xi and Ma tread a delicate line for the summit.

Neither were expected to address each other as "president", instead using "mister", and the handshake took place before an orange temporary backdrop pointedly devoid of any wording.

"Avoiding a setback in cross-Strait relations will take the concentrated efforts of both leaders," Douglas H. Paal, a former head of the de facto US embassy in Taiwan -- wrote in an analysis for the Carnegie Endowment.

"As any political pro would say, the optics of the visit could prove very important to the message that emerges."

Further reflecting the wide gulf between them, Ma will conduct Taiwan's briefing, while a lower-ranking official -- pointedly not Xi himself -- was expected to led China's.

Reunification of the two sides is not yet on the table, a possibility that remains far in the future, if it ever occurs.

But Ma has expressed hope the meeting will be a step toward normalising cross-strait relations, and says it could boost Taiwan's international profile.

The island has been marginalised by Beijing's insistence that other countries deny recognition to the Taipei government, breeding resentment among citizens.

Opponents accuse Ma, who leaves office soon, of using the summit to boost his ruling Kuomintang's (KMT) chances at presidential elections in January, which the party is tipped to lose.

China had repeatedly denied Ma's attempts to secure a face-to-face meeting, prompting questions over why the green light was given now.

Many analysts say China also wants to boost the ailing KMT, which it favours over the more independence-minded opposition.

But they warn the strategy could backfire with anxious Taiwanese voters if Beijing is seen meddling in the election.

The summit also is interpreted by some as a bid by Beijing to play the peacemaker and draw attention away from its aggressive expansionism in the South China Sea that has caused unease throughout the region.
Last Update: Nov 07, 2015 11:16 am