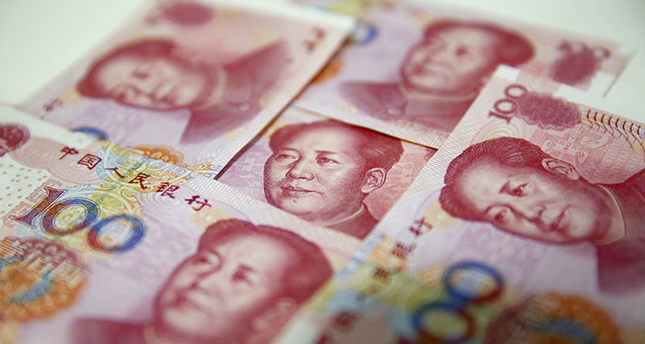 The disappointing figures show how Beijing is struggling to keep the world's second-largest economy on the rails and add to mounting evidence China could be heading for a hard landing.

As the planet's biggest trader in goods and a key driver of already subdued world growth, the figures will also add to signs the global economy is facing its toughest year since the height of the financial crisis.

Imports fell 18.8 percent compared to a year ago to $130.77 billion, the 12th consecutive monthly drop in imports, following a 20.4 percent decrease in September, according to customs figures.

Exports, too, continued their losing streak from July, dropping by 6.9 percent year-on-year in October to $192.41 billion as foreign demand languished.

That set the trade surplus at $61.64 billion, a 36 percent increase compared to the same period in 2014 and the highest such figure since at least 1995, the earliest data held on record by Bloomberg News.

The decrease in exports was larger than a median forecast of a 3.2 percent decline in a Bloomberg News survey of economists.

The data "suggests that domestic demand remained sluggish," ANZ analysts said in a research note, adding that they expect "imports growth may start to improve gradually" into the first quarter of 2016.

Weakness in China's property market, overcapacity in the manufacturing sector and slowed government spending on infrastructure have contributed to the country's economic slowdown and decreasing demand for commodities.

Falling demand from the world's top importer of everything from industrial metals and energy to corn has in turn driven commodity prices down, which has made China's exports even cheaper.

Coal imports have dropped almost 30 percent in volume and 45 percent in value over the first 10 months of the year, measured in the local currency, the data showed.

The sagging numbers have caused anxiety for countries like Australia and Mongolia, whose economies are driven by Chinese demand for the raw materials they produce, despite government efforts to stimulate the economy.

Last week, the ruling Communist Party announced its intention to pursue a combination of stimulus and structural reform measures in its 13th five-year plan, which provides guidance for the national economy through 2020.

Following the release, Chinese President Xi Jinping said annual expansion should be no less than 6.5 percent in 2016-2020 if the country is to double the size of its economy and average incomes compared to 2010 levels by the end of the decade.

Gross domestic product increased 7.0 percent in each of the first two quarters this year following growth of 7.3 percent for the full year of 2014, which was the weakest in nearly a quarter of a century.

Beijing is aiming to rebalance the economy to a sustainable model where expansion is predominantly driven by domestic consumer demand, but the transition is proving bumpy.

Botched stock exchange interventions and a sudden currency devaluation in August have rattled confidence in the country's leadership, whose legitimacy rests on maintaining an aura of economic infallibility.

The ever-growing trade surplus is likely to drive the value of the yuan up, Capital Economics wrote before the data's announcement, a change that could increase imports as consumers enjoy more buying power.

The central People's Bank of China adjusted the central rate of the yuan – also known as the renminbi – upwards by 0.54 percent against the U.S. dollar, this month, its largest increase since 2005.