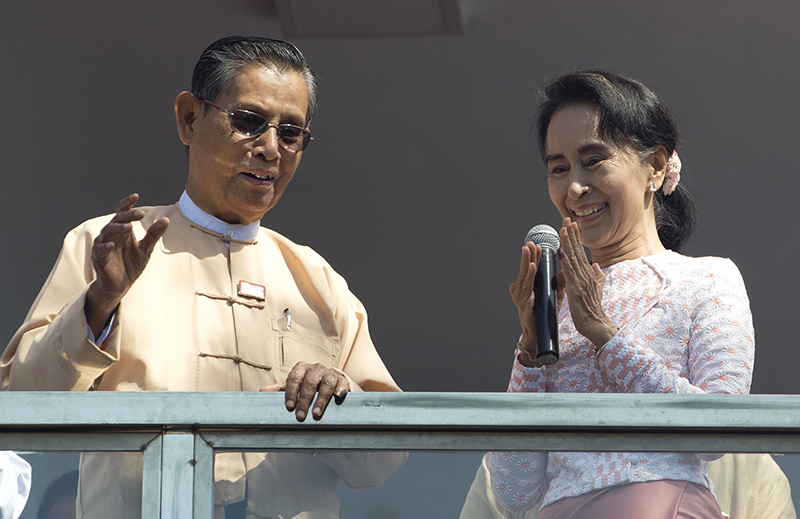 Leader of Myanmar's National League for Democracy party, Aung San Suu Kyi, delivers a speech with party patron Tin Oo from a balcony of her party's headquarters in Yangon, Myanmar (AP Photo)
by Daily Sabah with Wires Nov 09, 2015 12:00 am

Myanmar's opposition National League for Democracy (NLD) announced it expects to win a landslide victory in the country’s historic elections, prompting celebrations across the nation. However, the fairness and security of the elections have been questioned as thousands of Rohingya Muslims were barred from voting

Myanmar's ruling Union Solidarity and Development Party (USDP) conceded defeat to Aung San Suu Kyi's NLD, which said yesterday it was set to claim over 70 percent of seats following Myanmar's elections. Thousands of Rohingya Muslims were barred from voting in the election, however.

Suu Kyi, the Nobel Peace Prize laureate and pro-democracy icon, urged supporters of the opposition National League of Democracy party not to provoke losing rivals who mostly represent the former junta that ruled this Southeast Asian nation for a half-century. The NLD had won about 70 percent of the votes counted by midday Monday, party spokesman Win Htein said. The comments, if confirmed by official results from Sunday's general election, indicate that Suu Kyi's party would not only dominate Parliament, but could also secure the presidency despite handicaps built into the constitution. "We will win a landslide," Nyan Win, another party spokesman, told The Associated Press.

The government's Election Commission said yesterday that the NLD had won 12 lower house seats from the main city of Yangon, as it started announcing official results. The announcement elicited raucous cheers outside the opposition party's headquarters. The 12 seats were among 45 representing townships in Yangon. The NLD has been widely expected to finish with the largest number of seats in Parliament. Anticipating an imminent victory, more than 1,000 people gathered in front of the NLD headquarters in Yangon, many wearing red party T-shirts with the slogan "We Must Win" on the back.

No matter the results, the election will not create a fully democratic Myanmar, which ended a half-century of military rule in 2011, followed by a quasi-civilian government run by a party made up of former military figures now expected to fare badly in the elections.
Despite the excitement surrounding the first openly contested elections in decades, several human rights groups voiced concerns over the fairness and security of the elections as almost 500,000 eligible voters from the country's 1.3-million-strong Rohingya Muslim minority were barred from voting. The government does not accept individuals from this minority as citizens even though many have lived in Myanmar for generations. Neither the NLD nor the USDP is fielding a single Muslim candidate.

Abdul Melik, a 29-year-old Rohingya, spent election day watching other people vote. He stared out from a camp on the outskirts of western Rakhine state's capital, Sittwe, where the Rohingya are forced to live in squalid camps and can't leave without official approval. "I can see the Buddhist Rakhine, the Kaman Muslim and Hindus voting at a polling station close to the barricades," he said in a telephone conversation. "We were hoping that somehow we'd be allowed to vote. But today I have lost hope of any change in my lifetime." "This is the day that hope ends," he added.

"The jailing of peaceful activists, restrictions on free speech, discrimination and the political disenfranchisement of minority groups – the persecuted Rohingya in particular – significantly undermine the elections in Myanmar, Amnesty International said in a statement.

Josef Benedict, Amnesty's South East Asia Campaigns Director, said excluding Rohingyas from the election clearly indicates that the authorities "are not committed to addressing the situation of the Rohingya in a way that will respect their dignity and human rights. The effective exclusion of Rohingya from the election points to serious and entrenched discrimination and should raise alarm bells with the international community," he said in the statement.
A constitutional amendment bars anyone with a foreign spouse or child from being president or vice president. Suu Kyi's two sons are British, as was her late husband. Suu Kyi, however, has said she will act as the country's leader if the NLD wins the presidency, saying she will be "above the president."

Although 91 parties fielded candidates Sunday, the main fight was between the NLD and the ruling Union Solidarity Development Party, which is made up largely of former junta members. A host of other parties from ethnic minorities, who form 40 percent of Myanmar's 52 million people, also ran.

The junta, which seized power in a 1962 coup, annulled the results when Suu Kyi's party won a sweeping victory in 1990 elections. A new vote was held in 2010, but the opposition boycotted it, saying the election laws were unfair. The USDP won by default and took office in 2011 under President Thein Sein, a former general who began political and economic reforms to end Myanmar's isolation and jump-start its moribund economy. But the USDP was battered in a 2012 by-election in which the National League for Democracy won 43 of the 44 parliamentary seats it contested.

After the election results are finalized, the new members of parliament and the military appointees will propose three candidates, and then elect one as president. The other two will become vice presidents. The NLD would need an overwhelming win to take the presidency because of the seats reserved for the military, all of which now go to the USDP.

The Rohingyas are not recognized as one of the 134 official ethnicities of Myanmar because authorities view them as illegal immigrants from neighboring Bangladesh. They are subjected to forced labor, have no rights to own property and are heavily oppressed under the Burmese dictatorship. They have no permission to leave the camps built for them, have no source of income and have to rely on the World Food Program to survive. The U.N. considers Rohingyas to be one of the most persecuted minorities in the world.