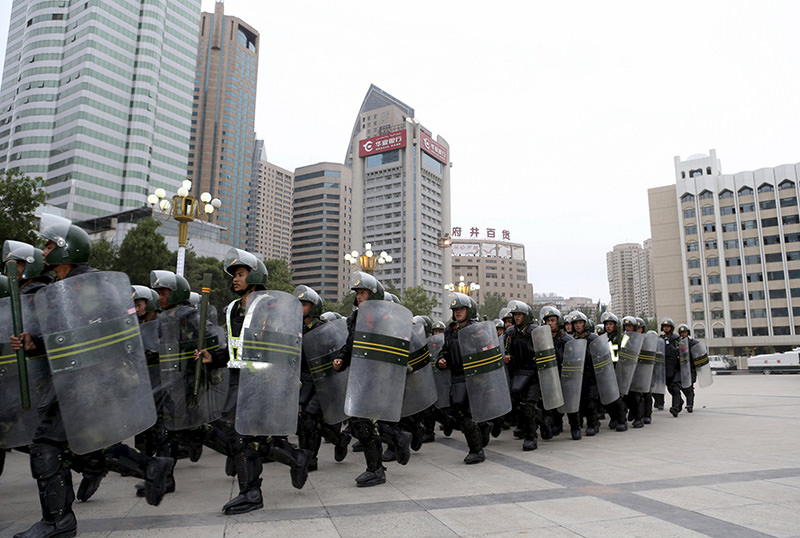 by Daily Sabah with Reuters
Nov 18, 2015 12:00 am
Chinese security forces in the restive far western region of Xinjiang have killed 17 people, including women and children, accused of involvement in an attack at a coal mine that left at least 50 dead, U.S.-based Radio Free Asia said on Wednesday.

Hundreds of people have died in unrest in Xinjiang, home to the mostly Muslim Uighur people, and other parts of China over the past three years or so.

The Uighur, who constitute around 45 percent of the population of Xinjiang, have accused China of carrying out repressive policies that restrain their religious, commercial and cultural activities, whereas China denies this and says they are undertaking "counter-terrorism" operations against only 'militants' in the region.

China says, they have appealed for the international community to provide more help in its campaign against the 'militants' in the Xinjiang region.

The government has made no public comment about the Sept. 18 attack at the Sogan colliery in Aksu, with Radio Free Asia reporting most casualties were members of the Han Chinese majority and police blaming knife-wielding separatists.

Radio Free Asia, citing Xinjiang police, said the 17 killed were all suspects in the attack, including three men believed to have been the ringleaders and their family members.

"I heard from colleagues who participated in the operation that the military blew up the cave where the suspects were hiding," the report quoted Xinjiang police officer Ghalip Memethe as saying.

"That is why we were able to kill all of them with zero victims [from our side]. Seventeen corpses were gathered after the explosion."

On Saturday, state media microblogs published pictures provided by the Ministry of Public Security of armed police on what it said was a 56-day mission to root out militants in Xinjiang, though it gave no details of the target, only that all the suspects had been killed.

Some of those reports were later removed from the Internet.

Radio Free Asia said that report likely referred to the operation to find the suspects in the coal mine attack.

The Ministry of Public Security did not respond to requests for comment. While the government often gives details about violence in Xinjiang, it is not uncommon for them not to report certain incidents at all.

A spokesman for China's Foreign Ministry, the only government department that regularly answers questions from foreign reporters, said he knew nothing about the report.

Rights groups and exiles say the violence in Xinjiang stems more from widespread Uighur resentment at Chinese controls on their religion and culture rather than being committed by a well-organized militant group.