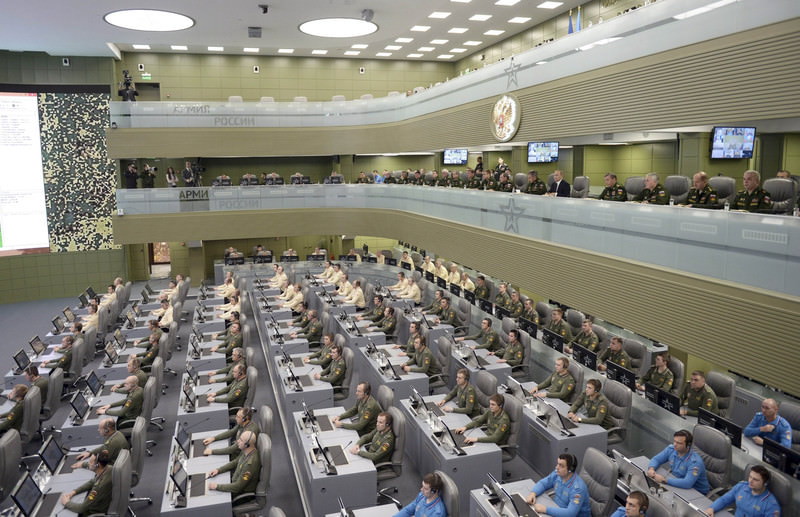 During his visit, Putin was showed live footage of long-range strategic bombers on way to Syria and was briefed on the latest Russian missions which come after a Russian passenger jet was downed by terrorists over Egypt last month. After the briefing, Putin ordered Russian commanders in Syria to make close cooperation with their newest ally France as part of Russia's efforts to gain a more prominent role in a proposed anti-terror coalition.

However, it was not the Russian president's visit, nor his orders that caught the most attention.

With its cinema-size screens, fortified walls and a 'said' maze of underground tunnels, the building could quite surely compete with those in the James Bond films, perfectly summing up Al Jazeera English's Russia correspondent Rory Challands' thoughts on the military complex.

The new national defense center is to be in charge of launching ballistic missiles, deploying nuclear weapons as well as serving as a critical center of communication during a possible war.

The roof top of the control center also has heli-pads to accommodate Russia's Mi-8 transport helicopter.

The new Russian complex proves quite ostentatious as it claims that it is indeed bigger and better than its U.S. equivalent, the National Military Command Centre at the Pentagon as one Russian state news agency headlined with "Russian Defense Data Center Outperforms US Facility Threefold: Official" this week, reported the Washington Post on Nov 21.

The center which was completed in 2014, comes as the newest addition of decade-long efforts to modernize the Russian army and has cost Russia billions of dollars.

About two miles from the Red Square, the 'war room' is located on the Frunzenskaya embankment, on the left bank of the Moscow river.

An Airbus A-321 passenger jet of Russian airliner Kogalymavia carrying 224 passengers and crew had crashed in Egypt's Sinai peninsula on Oct 31, killing all on board.

Daesh had released a photo of a bomb hidden in a soft drink can that it said had brought down a Russian passenger jet over Egypt last month, and had also announced on Nov 19 that it had killed hostages from Norway and China.