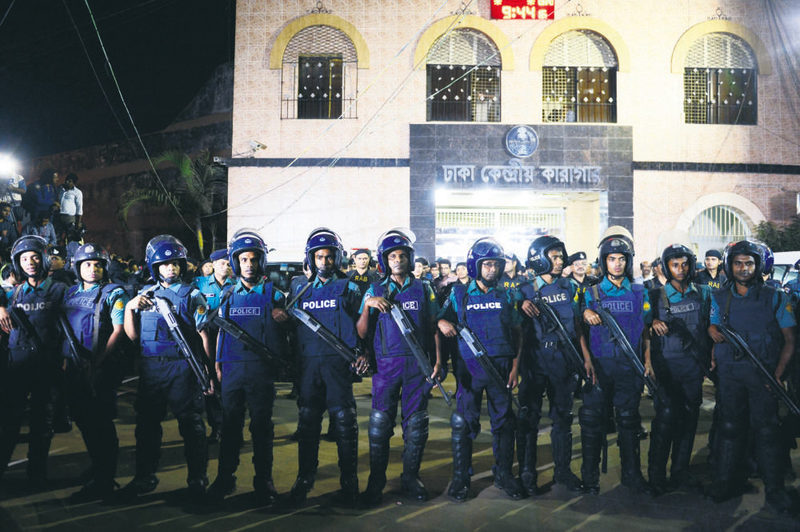 The Bangladeshi government Sunday executed two opposition politicians convicted of alleged war crimes during the independence conflict with Pakistan. Amid fears of unrest, thousands of police and security forces were deployed in the capital and a journalist was shot and wounded while covering a funeral

Bangladesh Sunday hanged two top opposition leaders for war crimes during the independence conflict with Pakistan, and security nationwide was strengthened over fears the executions could spark fresh unrest. Bangladesh Nationalist Party leader Salahuddin Quader Chowdhury and Ali Ahsan Mohammad Mujahid, secretary general of the main opposition party Jamaat-e-Islami, were "hanged together at the same time" at 12:55 a.m. local time at Dhaka Central Jail, Senior Jail Superintendent Mohammad Jahangir Kabir told The Associated Press. Thousands of extra police and border guards were deployed in Dhaka and other major cities and towns on the eve of a general strike called to protest the executions.

Supporters of the ruling Awami League meanwhile greeted the executions of Mujahid and Chowdhury by holding street parties and doling out sweets to children.

Bangladesh has been roiled by violence for much of the last three years since a domestic tribunal began delivering its verdicts on opposition figures accused of orchestrating massacres during the 1971 war. A total of 18 people have been convicted, but only two had been sent to the gallows before Mujahid and Chowdhury were hanged in Dhaka's Central Prison shortly before 1:00 a.m.

While the other three were members of the Jamaat-e-Islami, Chowdhury was a senior figure in the main opposition Bangladesh Nationalist Party (BNP). Jamaat, which was banned from contesting the 2014 general election, said the executions were part of a strategy "aimed at eliminating" its leadership. The BNP also accused Prime Minister Sheikh Hasina of presiding over a politically motivated killing, which was carried out only hours after BNP leader Khaleda Zia returned from a lengthy stay in London. Prime Minister Sheikh Hasina has denied the allegations.

Some of the tightest security measures were in force in the hometowns of the two executed men, whose funerals were held Sunday morning. "We've stepped up security across the country to prevent any violence, including on the roads along which the bodies were taken," police spokesman Munstashirul Islam told AFP. Hundreds of police were deployed outside the central city of Faridpur, where Mujahid was buried soon after daybreak. Reinforcements were also sent to Chowdhury's hometown of Raojan in the southeast.

The 67-year-old Mujahid, Jamaat's number two official, was sentenced for alleged war crimes, such as the killing of top intellectuals. Chowdhury, 66, was convicted of atrocities, including genocide, during the 1971 war when then-East Pakistan split from Islamabad. He served six terms as a member of parliament and was one of Zia's top aides.

Although international rights groups have criticized the trials as unfair, the government says they are vital for Bangladesh to confront its traumatic birth.

Relatives of war victims celebrated the hangings. "I've waited for this day for a long 44 years," said Shawan Mahmud, daughter of top musician Altaf Mahmud, who was killed by the notorious Al Badr militia that Mujahid was convicted of leading. But both men's families said they maintained their innocence to the end, denying they sought clemency in what would have amounted to an admission of guilt. "He said they are killing him because they could not beat him in the elections," Chowdhury's son Humam Qauder Chowdhury told AFP after a final meeting with his father.

Both the BNP and Jamaat claim Hasina is trying to neuter her opponents, having won re-election two years ago in a controversial contest boycotted by rivals. Thousands of BNP supporters have been arrested in recent months, further hampering its efforts to regain a footing in upcoming municipal elections. Authorities said those arrested have either carried out or plotted fire bombings and other attacks.

Jamaat-e-Islami had campaigned openly against independence for Bangladesh, which was part of Pakistan until the 1971 war.

The political violence has worsened tensions in the mainly Muslim country, which is also reeling from a string of killings of secular bloggers and the recent murder of two foreigners. Hasina said 3 million people were killed in the nine-month independence conflict. Researchers put the toll much lower.

Two days before the executions, Human Rights Watch said the government "should halt the imminent executions of two men convicted of war crimes." It also pointed out serious fair trial concerns, reminding the Bangladesh Supreme Court's rejection of reviewing petitions by Mujahid and Chowdhury and criticized the situation in which the tribunal allowed the prosecution to call 41 witnesses, while Chowdhury's defense was limited to four witnesses. The New York-based group said Mujahid was sentenced to death for instigating his subordinates to commit abuses, although no subordinates testified or were identified.

Journalist shot in Bangladesh after funeral for hanged opposition leader

Unknown assailants opened fire on a Bangladesh television channel's vehicle and wounded a journalist on Sunday, hours after two opposition leaders were hanged for war crimes committed during the 1971 war to break away from Pakistan. The shooting took place in southeastern Chittagong district when the vehicle was returning from the funeral of former lawmaker Salahuddin Quader Chowdhury, who was hanged along with ex-minister Ali Ahsan Mohammad Mujahid.

Two unknown attackers opened shots at the vehicle and wounded reporter Rajib Sen, according to Naimul Hasan, additional police superintendent of Chittagong. "We are trying to nab the attackers and find out the reason behind," he told Reuters by telephone.
RELATED TOPICS