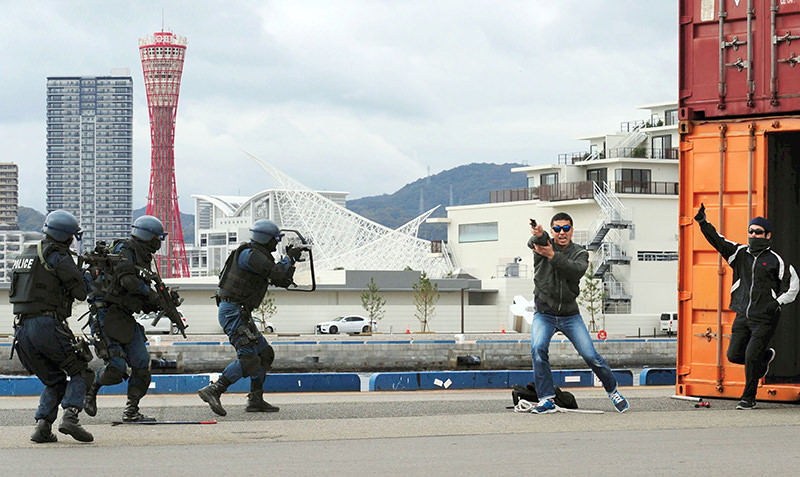 In this Thursday, Nov. 19, 2015 photo, riot police of Hyogo Prefectural Police, left, take positions against ,armed terrorists, performed by police officers during an anti-terror drill at a port in Kobe, western Japan (AP Photo)
by Dec 07, 2015 12:00 am
Japan is launching a new diplomatic unit this week to collect and analyze information on international terrorism, the government said Monday, in light of attacks on its citizens overseas and global assaults including those last month in Paris.

The beheading of two Japanese citizens earlier this year, claimed by Daesh terrorists, and the deaths of 10 others in a hostage crisis in Algeria in 2013 have highlighted the vulnerability of Japanese people abroad.

"We will take full measures to prevent terrorism and to protect Japanese nationals from harm," Suga told a regular press conference.

The unit, due to start operating Tuesday, will have about 20 personnel in Tokyo and 20 more based in Japanese diplomatic missions abroad, officials have said, and will concentrate on four geographic areas: Southeast Asia, South Asia, the Middle East and North and West Africa.

The government had originally planned to start the unit in April 2016. But recent major terrorist attacks, such as those in Paris, prompted the start date to be brought forward, a Japanese diplomat said.

Until the last few years Japan had been virtually unaffected by international terrorism, though there have been several incidents in the past, including when one of its aircraft was hijacked in the 1970s by a domestic group allied with a Palestinian faction in the Middle East.

Suga also expressed Japan's solidarity with the United States shortly after President Barack Obama gave a speech in which he vowed to defeat Daesh following last week's deadly rampage in California, which the US leader described as an act of terrorism.

Suga added that Tokyo will work closely with the US and other countries "to prevent acts of terrorism".

Japan has taken other steps in recent years to upgrade its intelligence-gathering capability including launching satellites to monitor North Korea, which has carried out nuclear tests and routinely threatens Japan.

The country is also making a point of showing that it is increasing security as it prepares to host the next G7 summit in May as well as the summer Olympics in 2020.
Last Update: Dec 07, 2015 12:15 pm
RELATED TOPICS