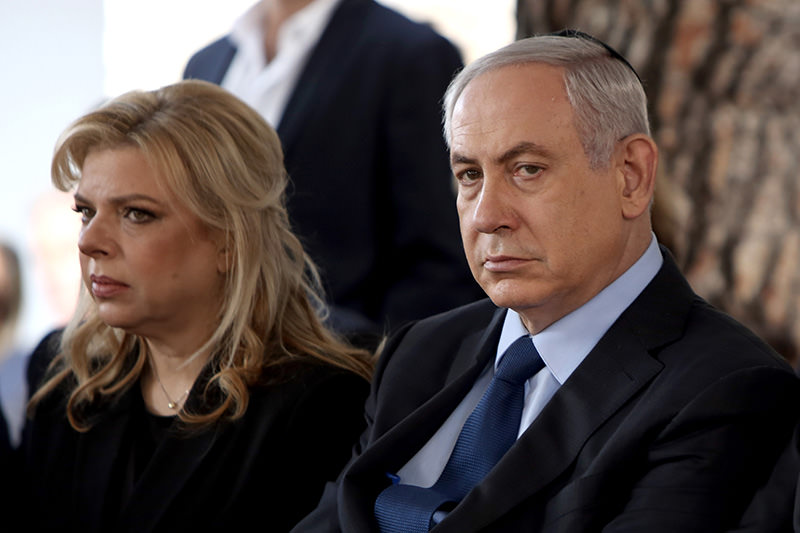 Israeli Prime Minister Benjamin Netanyahu and his wife Sara (AP Photo)
by Associated Press Jan 02, 2016 12:00 am
Israeli police questioned the wife of Prime Minister Benjamin Netanyahu on Thursday over her alleged inflated household spending, the latest in a string of accusations that have led critics to portray the first couple as a petty pair who improperly use state funds to subsidize an excessive lifestyle.

The questions are expected to focus on whether Sara Netanyahu used state funds to finance maintenance work and new furniture for the couple's private home in the exclusive coastal city of Caesarea. She may also be asked whether she or the state paid for the nursing care of her late father.

Israeli media reported the questioning, and cameras posted outside the police station showed her car arriving. Police declined to comment.

The investigation follows a report by the state's official watchdog that detailed large sums of public money the couple spent. Just last week, Israeli media reported that the Netanyahus asked for state funds to cover the cost of dog food for Kaiya a mutt they adopted which bit two guests at the Prime Minister's Hanukkah party earlier this month.

The Netanyahus have long faced scrutiny over their spending and accusations that their lifestyles are out of touch with regular Israelis. Sara Netanyahu has come under fire for her expensive tastes and alleged abusive behavior toward staff.

Sara Netanyahu has been a lightning rod for criticism going back to her husband's first term in the late 1990s, when she was accused of allegedly squabbling with her staff and meddling in state affairs. Among other things, she was accused of firing a nanny for burning a pot of soup and of throwing a pair of shoes at an assistant.

Since her husband returned to office in 2009, she has sued an Israeli newspaper for libel and defamation of character, claiming it was "maliciously trying to humiliate" her. A former housekeeper sued her in an Israeli labor court for allegedly withholding wages, unfair working conditions and verbal abuse. She's also been accused of using abusive language and forcing an employee to shower several times a day to ensure a "sterile" environment.
Last Update: Jan 02, 2016 1:14 pm
RELATED TOPICS