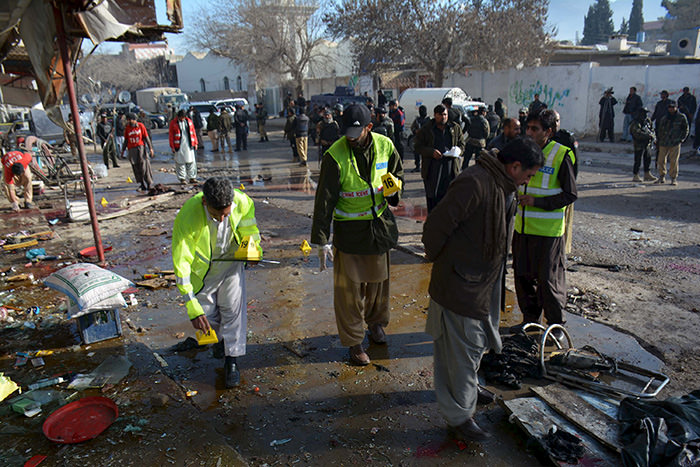 Crime scene investigators collect evidence from the site of a suicide bomb attack close to a polio eradication centre in Quetta, Pakistan, January 13, 2016 (Reuters Photo)
by Anadolu Agency Jan 13, 2016 12:00 am
At least 14 people, including 12 policemen, were killed in a bomb blast Wednesday in Pakistan's southwestern Baluchistan province, officials said.

The bomb struck a police van outside a polio vaccination center in the provincial capital Quetta.

"Initial investigations suggest that it could be a suicide blast, but nothing is confirmed so far," Bugti said.

There was no immediate claim of responsibility for the attack. However, Taliban militants and secular Baluch separatists have been operating in the region.

Baluchistan, which shares a border with Afghanistan and Iran, has seen a decades-long separatist movement that has left thousands dead.
Last Update: Jan 13, 2016 10:36 am
RELATED TOPICS