Nuclear bomb could ‘wipe out’ US, North Korea says 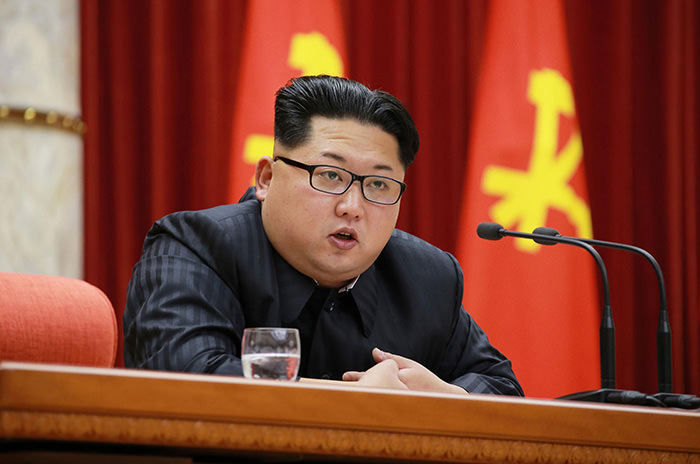 North Korean leader Kim Jong-Un (AFP Photo)
by Associated Press Jan 14, 2016 12:00 am
North Korea's U.N. mission claimed Wednesday that its successful nuclear bomb test showed that it could now "wipe out" the United States, as the U.N. Security Council grappled with a response to the underground blast.

North Korea called it a hydrogen bomb and said the test "scientifically proved the power of the smaller H-bomb," though the United States and others expressed skepticism that Pyongyang actually tested a hydrogen bomb for the first time. Nonetheless, whatever the North detonated underground will likely push the country closer toward a fully functional nuclear arsenal, which it still is not thought to have.

A Security Council diplomat said Wednesday that the U.N.'s most powerful body is working on a resolution that imposes tougher sanctions on North Korea to reflect the claim that it tested a more powerful hydrogen bomb, which is "a step change" from its three previous atomic test.

The diplomat, speaking on condition of anonymity because consultations have been private, said all 15 council members agree that North Korea should be denuclearized, and this will be reflected in a new resolution.

North Korea's U.N. mission circulated a report from the country's news agency saying the Jan. 6 test wasn't to "threaten" or "provoke" anyone but was indispensable to build a nuclear force "to cope with the U.S. ever-more undisguised hostile policy" toward the Democratic People's Republic of Korea, the country's official name.

It said North Korean scientists and technicians "are in high spirit to detonate H-bombs ... capable of wiping out the whole territory of the U.S. all at once as it persistently moves to stifle the DPRK."

Former Los Alamos National Laboratory director Siegfried Hecker, one of the world's top experts on North Korea's nuclear program, said last week he did not believe it tested "a real hydrogen bomb," and that "North Korea is still a long way off from being able to strike the U.S. mainland."

But Hecker, who has visited the North seven times since 2004, said in an interview with Stanford University's Center for International Security and Cooperation, that the most worrisome result of the test is that North Korea "will have achieved greater sophistication in their bomb design." He added that "at this point, what makes their nuclear arsenal more dangerous is not so much explosive power of the bomb, but its size, weight and the ability to deliver it with missiles."

There was no immediate response to a request for comment from the U.S. mission to the United Nations.

The Security Council last approved sanctions against North Korea three weeks after its third nuclear test on Feb. 12, 2013. That resolution was largely negotiated by the United States and China, North Korea's traditional ally.

South Korea's President Park Geun-hye called Wednesday for Chinese help to launch what she calls the "strongest" international sanctions on North Korea over the nuclear test.

The council diplomat said the United States, which is leading the current negotiations, is consulting closely with China but also with other council members, including Japan.

The diplomat said a new resolution isn't expected immediately, likely not in less than three weeks.