Death toll rises to 8 as civilian dies in Jakarta attack 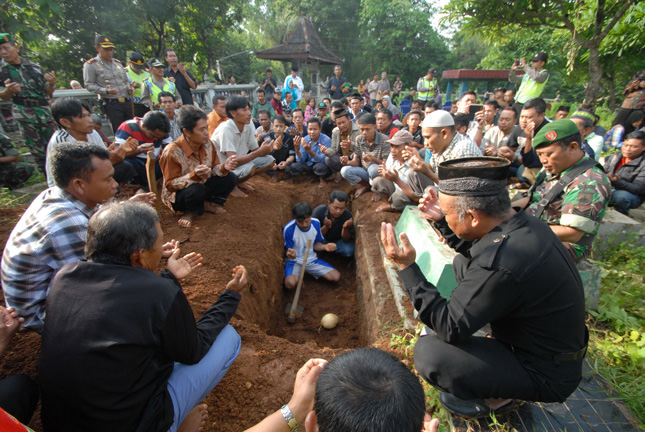 by Anadolu Agency Jan 17, 2016 12:00 am
One of 30 people injured in terror attacks on a shopping mall in central Jakarta has died, bringing the death toll to eight -- four of them Daesh-linked attackers.

Police had originally stated that five of those who died in the incident were militants, but on Sunday announced that one had been mistakenly identified.

Jakarta police spokesperson Commissioner Mohammad Iqbal said police had confirmed that Sugito -- now understood to be a 42-year-old courier who was passing a traffic police post outside Sarinah Shopping Center when it was targeted by a bomb -- had no connection to the "terrorist" acts.

"We reiterate that S [Sugito - many Indonesians use only one name] is an ordinary citizen. We ascertained this by examining his [identity] data and his parent's explanation," was quoted as saying by Detik.com.

On Saturday night, a 37-year-old civilian died after failing to regain consciousness following the attacks.

"A Sarinah bomb victim has died named Rais Karna on Saturday at 21:21 p.m.," a short message from the investigative team handling the investigation said.

Karna -- a security guard at the mall's Bangkok Bank outlet -- had been struck by a bullet in the head when two attackers fired into a crowd.

On Saturday, police said they had now arrested 12 people in west and east Java and in Kalimantan suspected of links to Thursday's attack.

Head of police Gen. Badrodin Haiti said that police had determined that Bahrun Naim, an Indonesian national fighting with Daesh in Syria, had sent funding to Indonesia via Western Union for the group to carry out the operation.

Kompas.com reported Sunday that police have asked the immigration office to issue a ban on Indonesian citizens who have travelled to Syria from returning to the country.

"It has been conveyed to the Immigration service in anticipation of a potential security threat," said National Police Chief Badrodin Haiti, although he underlined that not all Indonesians in the country have joined Daesh.

Police data showed that 308 Indonesian citizens are presently in Syria.

"Some of them are just temporarily living there," Haiti added