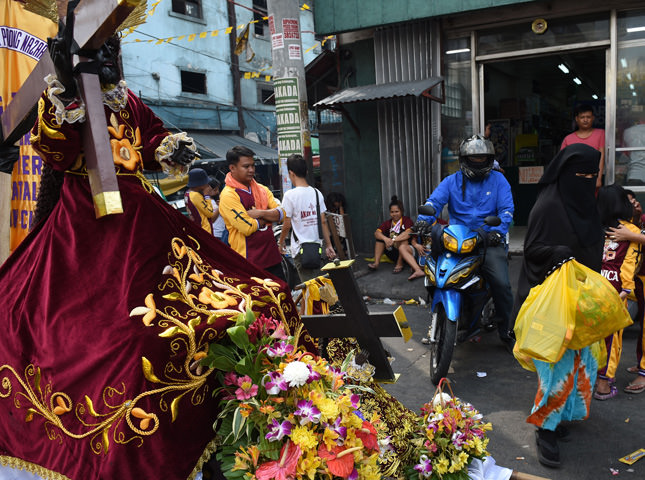 by Anadolu Agency Jan 17, 2016 12:00 am
Days after eight people died in a Daesh-affiliated attack in Indonesia's capital Jakarta, residents of a predominantly Christian city at the foot of the Philippines Muslim south say they are in fear of the Syria-based extremist group inspiring attacks in their midst.

Zamboanga residents frequently discuss their fears on the streets, while some have taken to Facebook to underline their angst. Three years ago, many were victims of a two-week siege by a militant group opposed to the country's ongoing peace process that left more left more than 300 people dead and thousands displaced.

"With the persistent terror threats and reported allegiance of the Abu Sayyaf to IS [Daesh], nobody knows, God forbids we too could fall victim to terror spillover," one resident posted on the online social networking service Sunday.

"I pray that no spillover of ISIS [Daesh] terror attack to us. The Abu Sayyaf and BIFF [Bangsamoro Islamic Freedom Fighters] terrorists who claim connections with ISIS is not something to be taken lightly by authorities, they should do something to contain the threats."

The Abu Sayyaf has pledged allegiance to Daesh, while BIFF -- another armed group in the South -- has also offered its support.

Philippine security officials, however, have downplayed the link, saying they don't see a possibility of the attacks in Jakarta spilling over into the Philippines and vowing not allow any local group to establish a local base for Daesh.

The Philippines, a predominantly Catholic country -- has a concentration of Muslim rebel groups in its southern regions. Some -- such as the Abu Sayyaf -- have had previous ties to international terrorist groups.

"This is especially so in the southern part of the country," InterAksyon.com quoted Mayor as saying

He added that he is in touch with the Directorate for Intelligence about coordination with their counterparts in Muslim-majority Indonesia regarding the aftermath of the Jakarta bombings to ensure "terrorists" hiding in Indonesia are unable to slip over the border and into Philippines territory.

Mayor sought to assure that as the Philippines and Indonesia are both members of Association of South East Asian Police (ASEANAPOL) there is a constant exchange of information to safeguard against the threat of terrorism.

The Philippines raised the alert level status of its forces nationwide Thursday after the deadly bombings in Jakarta, that were later claimed by Daesh.

Since 1991, the Abu Sayyaf -- armed with mostly improvised explosive devices, mortars and automatic rifles -- has carried out bombings, kidnappings, assassinations and extortions in a self-determined fight for an independent Islamic province in the Philippines.

It is notorious for beheading victims after ransoms have failed to be paid for their release.