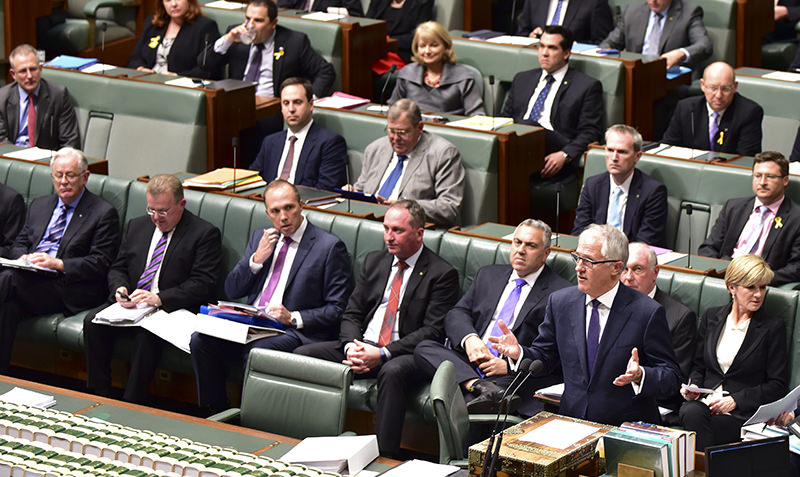 In this Sept. 15, 2015 file photo, Australian Prime Minister Malcolm Turnbull, bottom right, makes an address at Parliament after he was sworn in as prime minister in Canberra, Australia (AP Photo)
by Associated Press Feb 02, 2016 12:00 am
Lawmakers can now breastfeed in the Australian Parliament after the government changed the rules on Tuesday to make politics more family-friendly. But none of the nursing mothers appeared keen to take up the opportunity.

The rule change in the House of Representatives where 40 of the 150 members are women on the first sitting day of the year means that lawmakers can now bring their babies into the chamber. Previously children were confined to the public galleries or offices.

"No member, male or female, will ever be prevented from participating fully in the operation of the Parliament by reason of having the care of a baby," government minister Christopher Pyne said after moving a motion for change.

A parliamentary committee decided to examine rules for nursing mothers in the chamber after three representatives gave birth within a span of three months last year.

Opposition lawmaker Kate Ellis, whose son will have his first birthday in April, welcomed the change.

"While I support maximum flexibility for parents in the workplace, I have absolutely no plans to take my child into the chamber if I can avoid it," Ellis said in a statement.

Nursing mothers tending to their babies in their offices have been allowed to vote on legislation by poxy since 2008. This means that their votes are counted even though they are not in the chamber.

The rule change does not extend to the Senate, where Greens party Sen. Sarah Hanson-Young sparked a furor in 2009 by carrying her 2-year-old daughter into the chamber during a vote. She said she welcomed the change as a way to encourage more women to go into politics.
Last Update: Feb 02, 2016 3:15 pm
RELATED TOPICS