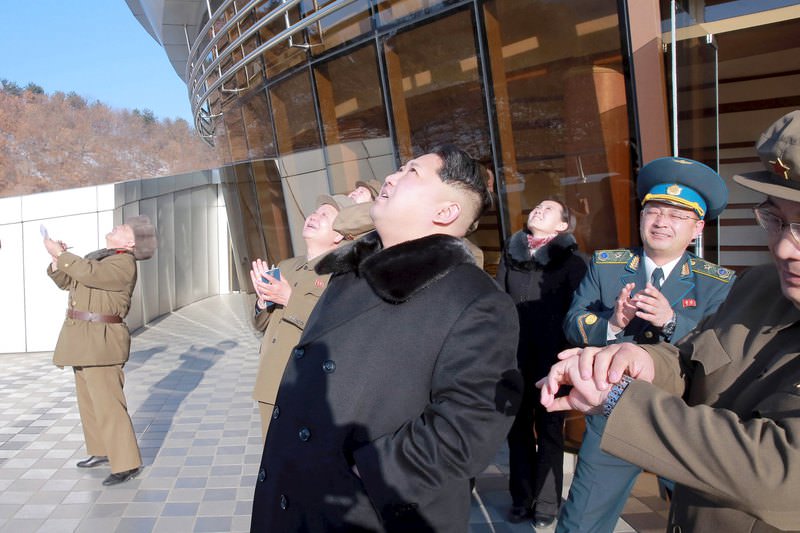 North Korean leader Kim Jong Un (C) watches a long range rocket launch into the air in North Korea, in this photo released by Kyodo February 7, 2016 (Reuters Photo)
by Compiled from Wire Services Feb 07, 2016 12:00 am
North Korea announced Sunday that it successfully blasted a satellite into orbit earlier in the day.

The official statement carried by Pyongyang's state-run media was backed up by a South Korean military official, who was quoted by local news agency Yonhap as admitting that "it's presumed that the projectile has entered into orbit."

South Korea's Joint Chiefs of Staff had earlier revealed that the launch took place just after 9.30 a.m. (0030GMT) from the same Dongchang-ri site as when North Korea last blasted a rocket into space, in 2012.

There had been some confusion with conflicting reports suggesting that the launch might have failed.

Successful or not, the rocket was fired just a day after it emerged that Pyongyang had brought forward its launch window -- having initially told a United Nations maritime agency that the earliest date would be Feb. 8.

Clear weather Sunday may have been a factor in prompting North Korea to decide to go ahead earlier, but the reclusive state had been under pressure to cancel what it described as a peaceful mission.

UN resolutions bar the North from ballistic missile technology, but the authoritarian state is yet to be punished for its nuclear test last month.

A statement from Seoul's presidential office condemned the rocket launch as "an extreme provocation".

In a development that will worry both Pyongyang and Beijing, a senior South Korean Defense Ministry official, Yoo Jeh Seung, told reporters that Seoul and Washington have agreed to begin talks on a possible deployment of the THADD missile defense system in South Korea. North Korea has long decried the 28,500 U.S. troops stationed in South Korea, and Beijing would see a South Korean deployment of THAAD, which is one of the world's most advanced missile defense systems, as a threat to its interests in the region.

Key regional players China and Russia have been pushing for dialogue over strict punishment since last month's nuclear test in the North.

South Korean President Park Geun-hye called the launch an "intolerable provocation." She said the North's efforts to advance its missile capabilities were "all about maintaining the regime" in Pyongyang and criticized the North Korean leadership for ignoring the hardships of ordinary North Koreans.

Japanese Prime Minister Shinzo Abe vowed to "take action to totally protect the safety and well-being of our people." U.S. National Security Adviser Susan Rice called the North's missile and nuclear weapons programs a "serious threats to our interests including the security of some of our closest allies."

The Foreign Ministry in China, the North's only major ally and its protector in the U.N. Security Council, where Beijing wields veto power, expressed "regret that, disregarding the opposition from the international community, the (North) side obstinately insisted in carrying out a launch by using ballistic missile technologies."
Last Update: Feb 07, 2016 3:31 pm
RELATED TOPICS