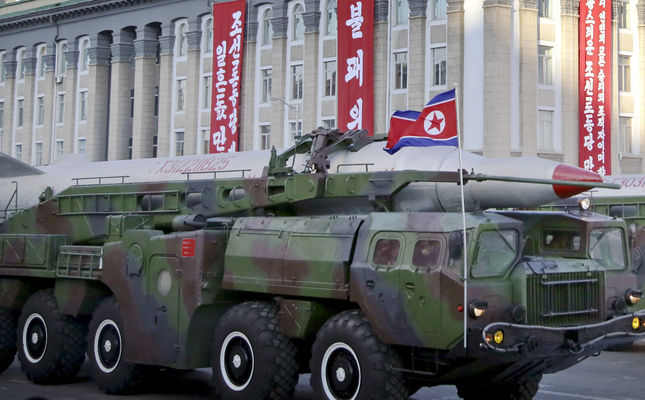 by Mar 04, 2016 12:00 am
The Pentagon on Thursday downplayed the risk from North Korea's nuclear arsenal, after Kim Jong-Un said the country's nuclear weapons must be ready for pre-emptive use at "anytime."

"The US government assessment has not changed," a US defense official told AFP.

"We have not seen North Korea test or demonstrate the ability to miniaturize a nuclear weapon and put it on an ICBM (intercontinental ballistic missile.)"

Still, the official added, "our forces are ready to counter-eliminate strikes if necessary."

Kim was quoted Friday (local time) by the official KCNA news agency as saying: "We must always be ready to fire our nuclear warheads at any time."

Kim also warned that the situation on the divided Korean peninsula had become so dangerous that the North needed to shift its military strategy to one of "pre-emptive attack."

Such bellicose rhetoric is almost routine for North Korea at times of elevated tensions.

The United Nations has adopted its toughest sanctions to date on Pyongyang over a recent nuclear test and rocket launch.

"We urge North Korea to refrain from provocative actions and rhetoric that aggravate tensions and instead focus on fulfilling its international obligations and commitments," the official said late Thursday.
Last Update: Mar 04, 2016 2:12 am
RELATED TOPICS