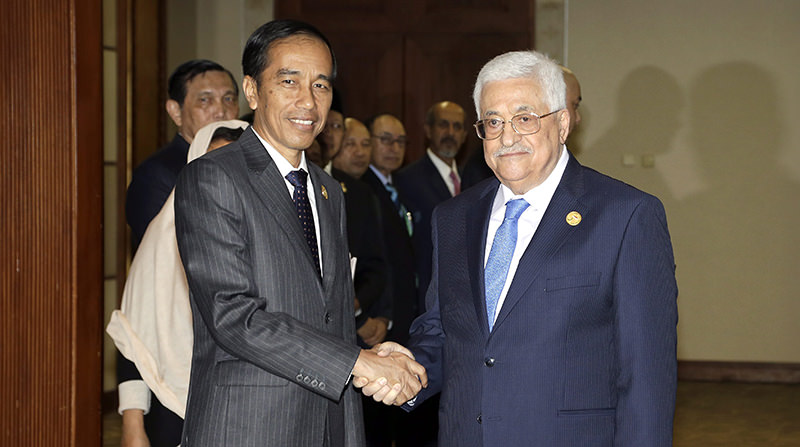 Palestinian President Mahmoud Abbas (R) is greeted by his Indonesian Counterpart Joko Widodo shortly before a bilateral meeting on the sideline of extraordinary summit of the Organization of Islamic Cooperation (OIC) (EPA Photo)
by Anadolu Agency Mar 07, 2016 12:00 am
Indonesian President Joko Widodo stressed Monday that the world's most populous Muslim country will always recognize Palestine as an independent state.

"Even though Palestine's efforts for independence are ongoing, Indonesia considers Palestine a country that has declared its independence," he said in his speech at the Organisation of Islamic Cooperation's (OIC) 5th Extraordinary Islamic Summit on Palestine and Al-Quds in Jakarta.

"For the resolution of problems in Palestine, Palestine must first be unified within. Indonesia will do whatever it can to secure this unity," he added.

Indonesia -- which does not recognize Israel -- is hosting the summit of the world's largest intra-Islamic body at a time of increased tensions in the Middle Eastern region.

Since last October, a rise in Palestinian frustrations has been attributed to the insistence of extremist Jewish settlers -- often accompanied by Israeli security forces -- of forcing their way into East Jerusalem's Al-Aqsa Mosque complex, Islam's third holiest site.

"We aim to raise awareness of the problems faced by Palestine and its people," Abbas added.