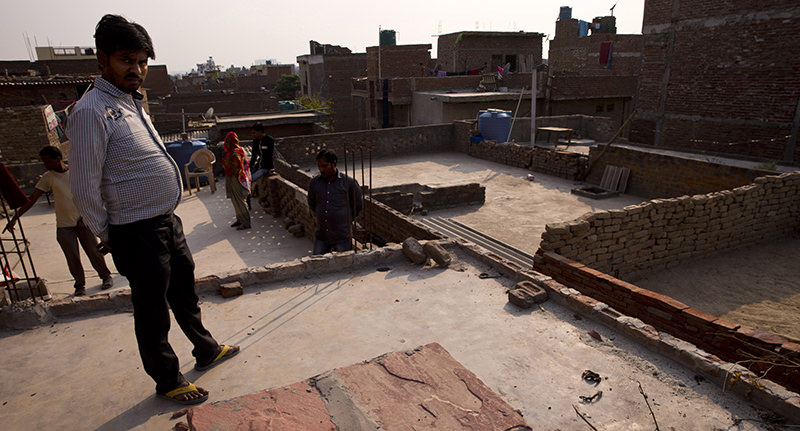 Relatives stand on the terrace of a house where a 15-year-old girl was set on fire after being raped at Tigri village, near Noida, a suburb of New Delhi, India, Tuesday, March 8, 2016 (AP Photo)
by Associated Press Mar 08, 2016 12:00 am
A 15-year-old girl was fighting for her life in a New Delhi hospital Tuesday after being raped and set on fire on the rooftop terrace of her family's home in a village outside the city, police said.

The attack is just one of several recently reported cases of rapes of women or children in India underlining the persistence of such violence despite a public outcry three years ago that led to stronger laws against sexual assault.

In the latest case, police have arrested a 20-year-old man suspected of raping and attempting to burn the girl to death Monday in Tigri village, near the New Delhi suburb of Noida in the state of Uttar Pradesh, according to constable Yadram Singh of the Bisrakh police station.

Singh said the man "had burns on his hands" and was charged with several offenses, including rape, attempted murder, assault of a minor and causing grievous injury.

The girl was in critical condition with severe burns over most of her body, Singh said. Indian newspapers said she had burns on 95 percent of her body.

Singh's police report on the case describes how the girl's parents found her after hearing her screaming from the rooftop terrace a few hours before dawn Monday.

The girl later told police that she was raped, beaten and then set on fire by a man who she said had been stalking her for months, Singh said.

India's women and children are considered particularly vulnerable to sexual violence and harassment because of widespread social taboos against speaking about sexual assault. The stigma is enough to keep many from even reporting crimes, while many others face police resistance in filing complaints.

Experts say that has started to change since the fatal gang rape of a 23-year-old woman on a New Delhi bus in 2012 triggered national anger and demands that more be done for women's safety. The government rushed through legislation to double prison terms for rape, and to criminalize voyeurism, stalking and the trafficking of women. But activists say more action is needed, including better educating youths and adding basic safety infrastructure such as street lights and public bathrooms.

The public debate has also increased Indian newspaper reports of rape and assault, including several in just the last few days.

On Monday, police in the financial capital of Mumbai said they were investigating whether a 4-year-old girl whose body was dumped in the bushes on the city's outskirts had been raped before being killed, according to the Press Trust of India news agency. The girl reportedly went missing after being separated from her mother at a railway station Sunday night.

In other cases in Uttar Pradesh, police arrested a 20-year-old man suspected of raping a 6-year-old Sunday night, and were separately investigating nine people for allegedly gang raping a woman when she went into the fields to go to the bathroom last month, PTI reported.

And last week, three boys reportedly kidnapped a teenage girl from her home and raped her repeatedly in a field in the northern state of Haryana and later in New Delhi before she escaped, the news agency cited police as saying.
Last Update: Mar 08, 2016 3:07 pm
RELATED TOPICS