US, South Korea hold massive drill as the North steps up threats 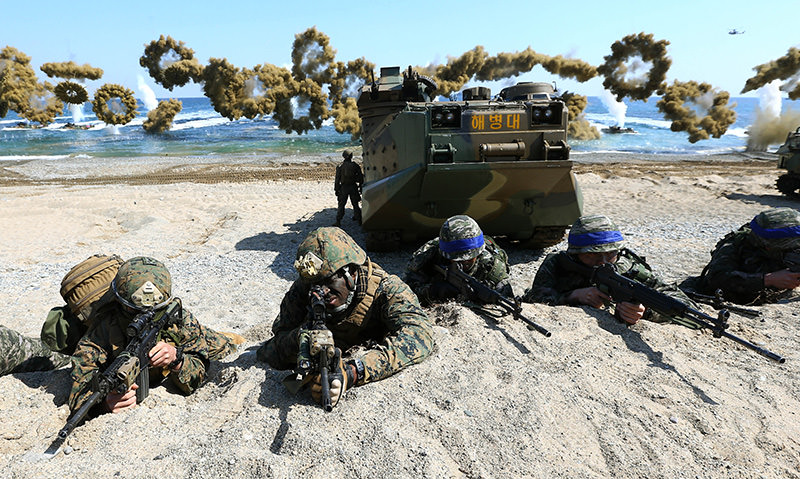 The landing and assault drills on South Korea's east coast were part of eight weeks of joint exercises between the allies which the South has said are the largest ever. The North has denounced the exercises as "nuclear war moves" and threatened to respond with an all-out offensive.

Tension on the Korean peninsula has been high since the North conducted its fourth nuclear test in January and followed that with a long-range rocket launch last month, triggering new U.N. sanctions.

About 55 U.S. marine aircraft and 30 U.S. and South Korean ships, including the USS Bonhomme Richard and USS Boxer, which carry AV-8B Harrier attack jets and V-22 Osprey aircrafts, took part in the assault on beaches near Pohang city, the U.S. navy said.

"They will penetrate notional enemy beach defenses, establish a beach head, and rapidly transition forces and sustainment ashore," the U.S. military based in South Korea said in a statement before the exercise.

The North's military said it was prepared to counter the U.S. and South Korean forces "with an ultra-precision blitzkrieg strike of the Korean style".

"The revolutionary armed forces of the Democratic People's Republic of Korea (DPRK) holding tightly the arms to annihilate the enemies with towering hatred for them are waiting for the dignified Supreme Command to issue an order to launch a preemptive strike of justice," it said in comments carried by the state KCNA news agency.

The South Korean and U.S. militaries have said they had notified the North of "the non-provocative nature" of the exercises involving about 17,000 American troops and more than 300,000 South Koreans. The U.S has about 28,500 troops stationed in South Korea.

CNN reported on Saturday that North Korea has been searching for one of its submarines that has been missing for days off its east coast.

The submarine may be adrift under the sea or have sunk, perhaps after a technical problem during an exercise, CNN quoted U.S. officials with intelligence of secret U.S. monitoring of the North's activities as saying.

North Korea has said it is developing submarine-launched ballistic missiles although doubts about that were raised after Western experts said publicly released footage of tests appeared to be fake.

Kim has ordered the country to improve its nuclear attack capability by conducting more tests, in defiance of a U.N. Security Council resolution adopted last week in response to the isolated state's latest nuclear test.

Kim also said his country had miniaturized nuclear warheads to mount on ballistic missiles, although the U.S. and South Korean governments have expressed doubts about that too.

Despite global skepticism, however, The North's official DPRK Today media outlet apparently repeated the claim that Pyongyang has been able to develop miniaturized warheads, thus posing a threat to the United States mainland. Sunday's article boasted that the North's new weapon is more powerful than anything possessed by the former Soviet Union, based on a report published by South Korean news agency Yonhap.

North Korea could "wipe out everyone in Manhattan" with a hydrogen bomb, according to one of the authoritarian state's nuclear scientists Sunday, as cited by South Korean reports.

Relations among two neighbors were also strained due to South accusing the North over cyber attacks aimed at its government officials. South Korea's spy agency told lawmakers on Friday that North Korea had recently stepped up cyber attack efforts against the South and succeeded in hacking the mobile phones of 40 national security officials, according to members of parliament who received a closed-door briefing.

But the North's Rodong Sinmun newspaper rejected South Korean allegations raised this month that Pyongyang was behind a cyber attack on the smartphones of Seoul officials.

"The South is claiming the North's cyber attack and using it for its own political purpose," an opinion piece in the Rodong Sinmun, the official daily newspaper of the North's ruling party, said on Sunday.

It accused the South of making the cyber attack claim in order to justify a controversial new "anti-terrorism" law.

"There is nothing to expect but the sound of eating corpses from a crow's mouth. However, we cannot just overlook the South's abrupt, provocative, and heinous accusations against its neighbor," the article said.

South Korea has been on heightened alert against the threat of cyber attacks by North Korea after it conducted a nuclear test in January and a long-range rocket launch last month, triggering new U.N. sanctions.

Tensions are also heightened on the Korean peninsula as South Korea and the United States conduct annual joint military exercises that the South says are the largest ever and on Sunday included the arrival in South Korea of the nuclear-powered aircraft carrier USS John C Stennis.

North Korea has denounced the exercises as "nuclear war moves" and threatened to respond with an all-out offensive.

The United States accused North Korea of a cyber attack against Sony Pictures in 2014 that led to the studio cancelling the release of a comedy based on the fictional assassination of the country's leader, Kim Jong Un. North Korea denied the accusation.