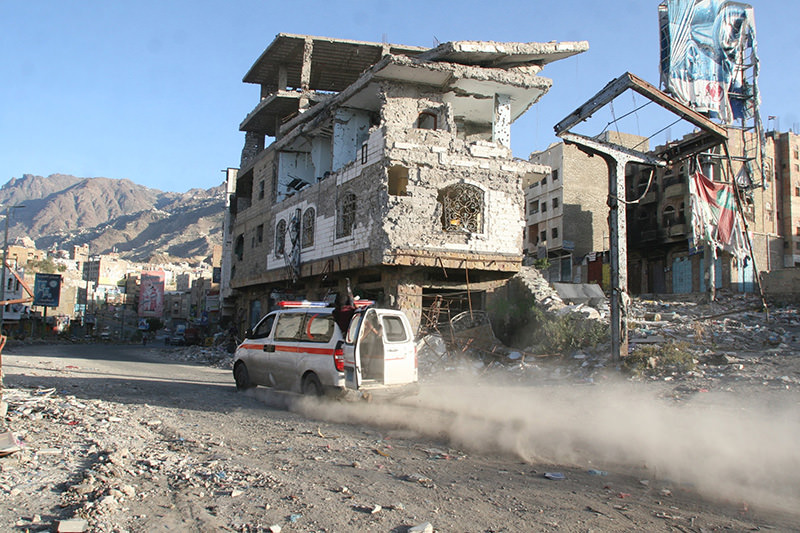 An ambulance drives past a building destroyed during recent fighting in Yemen's southwestern city of Taiz March 14, 2016 (Reuters Photo)
by Associated Press Mar 15, 2016 12:00 am

The state-run news agency SABA, which is controlled by the Houthis, said at least 65 people were killed and 55 wounded. A nearby hospital received dozens of wounded people, but no bodies, perhaps because families buried them. Three witnesses described a scene of carnage, with dozens wounded or killed, but had no precise figures.

The market in the city of Mastaba, in Hajja province, serves tens of thousands of people and was struck during a busy time. Witnesses said there were no military targets nearby. A Saudi-led coalition has been battling the Houthis on behalf of the internationally recognized government for a year now.

Doctors Without Borders spokeswoman Malak Shaher told The Associated Press that at least 40 of the wounded were transferred to a nearby hospital, three of whom were in critical condition.

The Houthis' TV network al-Masirah showed graphic footage of dead children and charred bodies next to sacks of flour and twisted metal. Witnesses said houses, shops and restaurants were also damaged, while cars caught on fire.

"The scene was terrifying," Showei Hamoud told The Associated Press by phone from Mastaba. "Blood and body parts everywhere." He said many of the dead were children who worked stalls or carry goods in return for tips.

"People collected the torn limbs in bags and blankets," he said, adding that he could count up to 40 motionless bodies.

A second witness, Mazahem Khedr, said "dozens were killed" and that he saw wounded people screaming for help. Mohammed Mustafa said people were afraid to help the wounded, fearing a third airstrike.

Hajja is northwest of the capital, Sanaa, which fell to the Houthis in September 2014.

The conflict pits the rebels and military units loyal to a former president against the internationally-recognized government, which is largely confined to the southern city of Aden. The fighting has killed more than 6,200 civilians, displaced millions and pushed the Arab world's poorest country to the brink of famine.

The Houthis issued a statement describing the market attack as "gruesome crime" that threatens peace talks, but stopped short of vowing to retaliate. On Monday, the Houthis confirmed carrying out a prisoner exchange with Saudi Arabia and said they were open to negotiating a peace deal with Riyadh's coalition.