Syrians want to go back home if peace talks are successful, opposition says 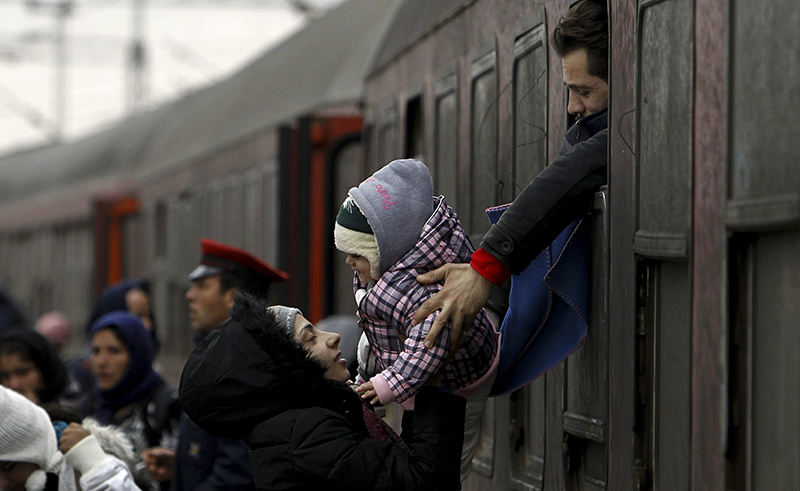 A refugee man passes a baby to a woman from a train window, upon their arrival at the transit center for refugees near northern Macedonian village of Tabanovce, Wednesday, Feb. 10, 2016 (AP Photo)
by Mar 18, 2016 12:00 am

Millions of Syrian refugees just want to return home and will do so if peace talks in Geneva are successful and the fighting ends, a spokesman for the main opposition High Negotiations Committee (HNC) said on Friday.

More than 4.8 million Syrians are refugees in countries bordering Syria, including Lebanon and Turkey, and in north Africa, while a further 900,000 have applied for asylum in Europe, mostly Germany, since the war began five years ago, according to the U.N. refugee agency UNHCR.

"Honestly, if you ask any person about what place is better for him, he will say home," said Salim al-Muslat as a round of U.N.-mediated peace talks entered its fifth day.

"We appreciate what the other countries did, embracing the Syrian people and the Syrian refugees. But their presence in these countries is temporary, they must return and they will return when they find a safe home in Syria," Muslat said.

"They are waiting for the results of these negotiations. If the results are positive, everyone will pack their luggage and head to Syria."

Muslat said the negotiating team representing the Assad regime was procrastinating and refusing to enter direct talks with the HNC delegation, which wants to get quickly into negotiating a political transition.

"If they insist on indirect talks, they came here in Geneva just to waste time and buy time for Assad," he said.

Although the HNC is the main opposition delegation, the United Nations' mediator Staffan de Mistura has also invited several other groups who say they are part of the anti-Assad opposition.

"With all respect to some people who were invited by Mr de Mistura as consultants or whatever, most of them, they were sent by the regime," Muslat said.

"They've been defending this regime even when he (Assad) is committing crimes in Syria and I don't think that's acceptable for the Syrians. The Syrians want people who care about them to represent them here."

The Geneva talks are part of a diplomatic push launched with U.S. and Russian support to end a war that has killed more than 250,000 people, created the world's worst refugee crisis and allowed for the rise of Islamic State.