No change for New Zealand flag after $17M referendum 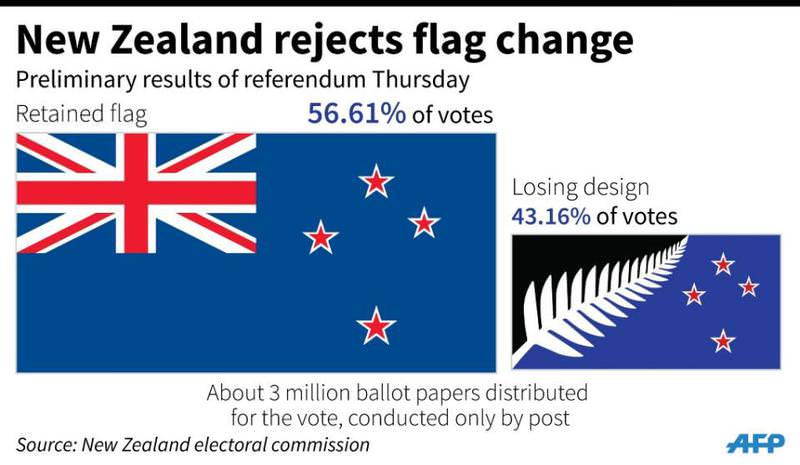 by Anadolu Agency Mar 25, 2016 12:00 am
After a multi-million dollar year-long referendum on changing the country's flag, more than 2 million New Zealanders have flown the flag of democracy at its proudest – the New Zealand flag is staying. Yesterday, an overwhelming majority voted down the carefully chosen new design for the new flag, instead choosing to stick with the version that has been the official New Zealand emblem since 1902. "The flag process was truly democratic – that's something we can all run up the flag pole and salute," tweeted New Zealand Listener Editor Pamela Stirling, using the competitions hashtag #nzflag. Others, however, chose to focus on the NZ$26 million ($17.4 million) cost of the two referendums prior to Thursday's vote. Fellow Twitter user Melanie Bracewell tweeted: "I wish we just divided the 26 million up and got $6 each instead of this #nzflag."

Preliminary results showed that 1,200,003, 56.6 percent of voters, wanted to keep the old emblem, while just 915,008, 43.2 percent, opted for the new design by Kyle Lockwood featuring a silver fern. Thursday's vote was between the original flag, which the Union Jack, the flag of the United Kingdom, adorns and a new design that depicts a white fern on a black and blue background with four red stars. The fern is widely considered a national symbol, but the design had been described by some critics as looking like a corporate logo, while others likened it to a beach towel. The alternative design had been whittled down from more than 10,000 others that were submitted after Prime Minister John Key, who was in favor of change, announced the referendum in Oct. 2014.

Speaking to reporters at Auckland Airport after the vote, Key said he respected New Zealanders' choice. Asked whether the referendum process had been worth the NZ$26 million, he said it had sparked an "enormous," healthy, countrywide debate. The results of the referendum are expected be confirmed March 30.
RELATED TOPICS