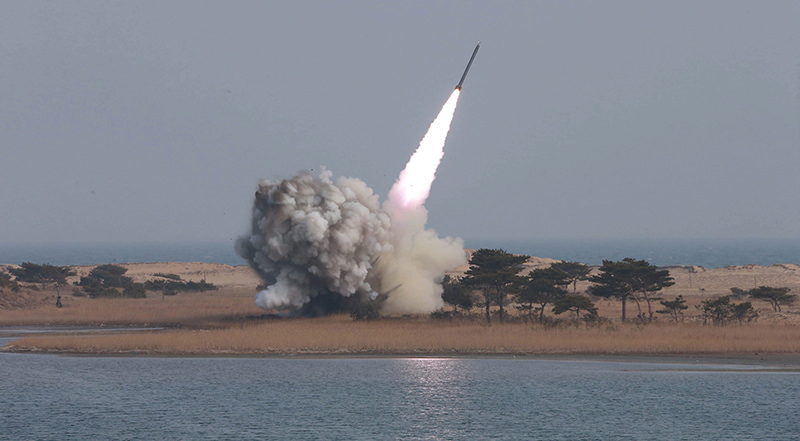 An undated handout file photograph made available on 04 March 2016 by the North Korean news agency KCNA shows the test-firing of new-type large-caliber multiple launch rocket system by the North Korean military (EPA Photo)
by Compiled from Wire Services Apr 01, 2016 12:00 am

It was the latest in a series of North Korean missile launches during what has been an extended period of elevated military tension on the Korean peninsula, triggered by Pyongyang's fourth nuclear test on January 6.

The launch came as the South Korean coastguard reported that around 70 fishing vessels had been forced back to port after GPS navigation issues caused by North Korean radio-wave jamming.

South Korea's defence ministry said the surface-to-air missile was fired at around 12:45 pm (0345 GMT) from the eastern city of Sondok.

The range and precise trajectory could not immediately be confirmed, a ministry official said. The South's Yonhap news agency said it flew 100 kilometres (60 miles) into the East Sea (Sea of Japan).

The launch came in the middle of a two-day nuclear security summit being hosted by Barack Obama in Washington, at which North Korea has been the focus of the U.S. president's talks with the leaders of China, South Korea and Japan.

Obama spoke Thursday of the need to "vigilantly enforce the strong UN security measures" imposed on the North after its latest nuclear test and subsequent long-range rocket launch.

Pyongyang's state media has labelled the summit a "nonsensical" effort to find fault with the North's "legitimate access to nuclear weapons".

Last month, the North upped the ante by test-firing two medium-range missiles, which were seen as far more provocative given the threat they pose to neighbours like Japan.

"GPS jamming is an act of provocation. We urge the North to stop such provocative acts and behave in a manner that would help improve inter-Korean relations," Unification Ministry spokesman Jeong Joon-Hee told journalists.

The coastguard said 71 out of 332 fishing boats that set out for sea on Friday morning had to return after GPS problems compromised their navigation systems, Yonhap reported.

Meanwhile, North Korea has officially announced it is blocking Facebook, YouTube, Twitter and South Korean websites in a move underscoring its concern with the spread of online information.

The Ministry of Posts and Telecommunications announcement was posted this week at the country's main mobile service provider, Koryolink, and other places serving Internet users.

It said "anti-republic false propaganda websites, sex and adult websites" are blocked, along with YouTube, Facebook, Twitter, Voice of America and South Korean media sites. Such sites had been informally blocked for months, and they could not be accessed Friday in a Web search from Pyongyang.

Very few North Koreans have Internet access. Typically they can only see a sealed-off, government-sanctioned intranet. But foreigners in the country had previously been able to surf the Web freely.