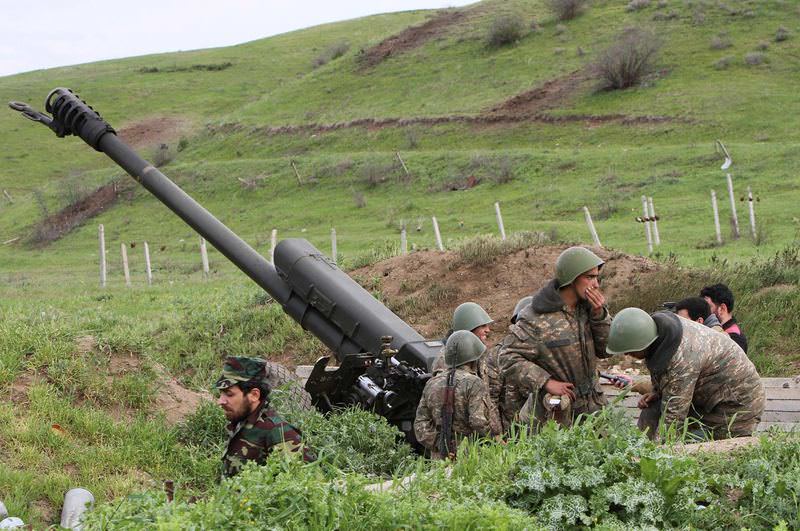 Armenian militias use heavy weapons to attack Azerbaijani military units in Nagorno-Karabakh region.
by Compiled from Wire Services Apr 07, 2016 12:00 am

Armenian-backed forces violated a ceasefire in Azerbaijan's breakaway Nagorno-Karabakh region 115 times in the last 24 hours, RIA news agency cited the Azeri Defense Ministry as saying on Wednesday. There were fears of an all-out war since the local people are afraid of Armenian militias who have committed massacres before. The ministry accused Armenian forces of breaking the truce on several occasions Wednesday by firing mortars at Azerbaijani positions, adding that Azerbaijani forces hasn't returned fire. However, military spokesman for self-proclaimed Nagorno-Karabakh Senor Asratyan has countered by saying that its forces have strictly respected the cease-fire, which was agreed by the top military officers of Azerbaijan and Armenia who met in Moscow on Tuesday. Azerbaijan's defense minister, Vagif Dargyakhly, said that 31 Azerbaijani soldiers have been killed in action since Saturday.

The Armenian militias said Tuesday that 29 of its soldiers have been killed and another 101 wounded in fighting since the weekend. Mustagim Mammadov, the head of local administration in Terter, a region in Azerbaijan affected by fighting, said the Armenian forces fired automatic weapons overnight at front-line villages in the area, but there were no casualties. He added that there was no fighting during daytime Wednesday. Mammadov, who was speaking by telephone from the front-line village of Gapanli, said that life in the village was getting back to normal Wednesday as a local school reopened and local residents worked to restore power lines. Three civilians were killed and another six were wounded in the Terter region during the latest outburst of fighting, Mammadov said.

Turkish President Tayyip Erdoğan said on Wednesday he hoped Armenia would respond to Azerbaijan's efforts to end the current crisis over the breakaway Nagorno-Karabakh region. In a speech broadcast live, Erdoğan also said if any party was taking sides in the conflict it was Russia, responding to a charge he said Moscow made that Turkey was siding with Azerbaijan. Turkey has vowed to stand by Azerbaijan, with which it shares close linguistic and ethnic ties.

Mediating in the conflict has for years been assigned jointly to envoys from France, Russia and the United States. But Moscow has ramped up its diplomatic role in the past few days. Officials from both sides said the truce was agreed at a meeting in Moscow between the chiefs of staff of the Azeri and Armenian militaries. The Kremlin said Russian President Vladimir Putin had telephoned the leaders of Azerbaijan and Armenia to urge them to agree a ceasefire. Meanwhile, Russian Prime Minister Dmitry Medvedev and Foreign Minister Sergei Lavrov were both heading to Azerbaijan's capital, Baku, in the next few days.

Armenian militia has occupied Azerbaijan's Karabakh region since 1993, similar to how pro-Russian militia have illegally occupied parts of Ukraine since 2014. Three U.N. Security Council resolutions (853, 874 and 884) and UN General Assembly resolutions 19/13 and 57/298 refer to Karabakh as being part of Azerbaijan. The Parliamentary Assembly of the Council of Europe (PACE) also refers to the territory as under the occupation of Armenian forces.
RELATED TOPICS