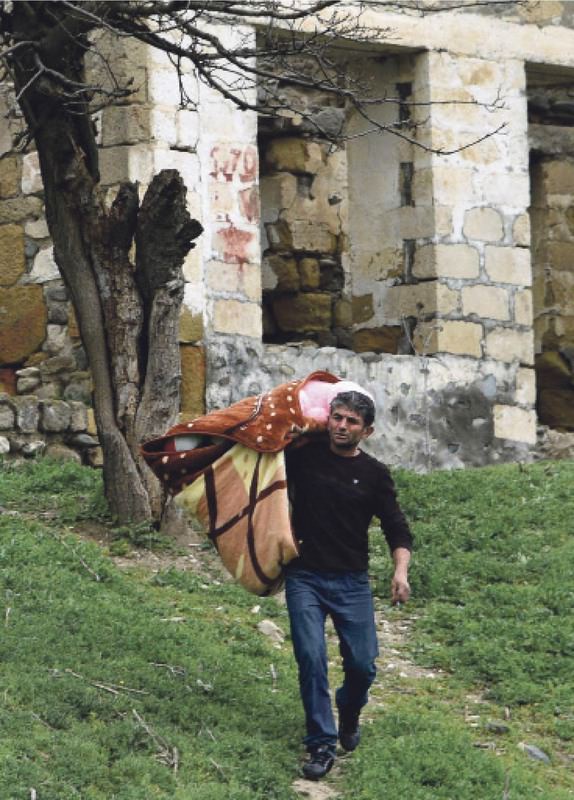 Despite warnings from the international community concerning the threat of an all-out war in Nagorno-Karabakh region, Armenian militias' aggression pose a menace to the fragile truce

Azerbaijan and Armenia on Thursday accused each other of violating a two-day-old cease-fire in Nagorno-Karabakh, while Russia and Iran joined diplomatic efforts to prevent an all-out war that could destabilize the strategic Caucasus region. Azerbaijan's Defense Ministry said its troops returned fire after Armenian forces fired mortars and large-caliber machine guns at Azerbaijani military positions and populated areas. The Armenian side accused Azerbaijan of shelling its positions. The intense skirmishes have threatened to derail the Russia-brokered cease-fire declared at midday Tuesday following an outburst of fighting that marked the worst violence since a separatist war ended in 1994. That conflict left Nagorno-Karabakh, officially a part of Azerbaijan, under the control of local ethnic Armenian forces and the Armenian military. Armenian forces also occupy several areas outside the Karabakh region. Azerbaijan's Defense Ministry has said 31 of its soldiers have been killed since Saturday; Karabakh has acknowledged the loss of 30 and said 101 others have been wounded. Each party put enemy losses in the hundreds, rival claims that couldn't be independently verified. Several civilians also have been killed on both sides.

The fighting involving heavy artillery and rockets raised fears of a possible escalation, with Turkey strongly backing Azerbaijan and Russia obliged by a mutual security pact to protect Armenia. Turkish President Recep Tayyip Erdoğan has vowed that Turkey backs Azerbaijan in its struggle against Armenian militias and has said that the region will surely be returned to its real owner, Azerbaijan.

Russia also has sought to maintain friendly ties with energy-rich Azerbaijan and provided it with weapons in a bid to shore up its influence in the Caucasus region, a conduit for energy resources from the Caspian Sea to the West. Russia also has acted as a mediator in the Nagorno-Karabakh peace talks along with the United States and France, which have dragged on since 1994 without any visible results. Russian Foreign Minister Sergey Lavrov voiced hope that the cease-fire will hold and emphasized the need to advance a political settlement. "Practically all components of an agreement are already on the table," he said following talks with his counterparts from Azerbaijan and Iran in Baku, Azerbaijan's capital. Russian Prime Minister Dmitry Medvedev, meanwhile, was in the Armenian capital Thursday. Lavrov said he also would continue to pursue a diplomatic solution during meetings with Armenia's foreign minister on Friday. Russian President Vladimir Putin has talked to both Azerbaijani and Armenian presidents to help reach the cease-fire agreement, which was negotiated by the top military officers of the warring sides during Tuesday's meeting in Moscow. Putin's spokesman Dmitry Peskov said that Russia's friendly ties to both nations helped it quickly broker the truce, but he acknowledged that that "the situation now is far from being stable." For Iran, the Baku meeting was a chance to improve its sanction-stricken economic ties with neighboring countries. During their joint news conference, Iranian Foreign Minister Mohammad Javad Zarif focused on plans to boost cooperation with Azerbaijan and Russia on transport, energy and security.

With the dissolution of the Soviet Union, Armenian forces, aided by the weapons vacuum, former Soviet forces fighting as mercenaries on their side and support from locals, captured the former autonomous oblast along with large surrounding areas in its east and south. When the fighting reached to a stalemate in 1994, around one-fifths of Azerbaijan's territory was inavded by Armenian and Karabakh troops and remained under their control ever since. Azerbaijani troops are roughly in control in 20 percent of the territories of the separatist region, which makes up less than half of the occupied territories. Armenian forces are being accused of committing grave human rights violations against local Azerbaijani population in invaded territories, with the Khojaly Massacre being the most notable. More than 700,000 Azerbaijanis and 300,000 Armenians were displaced due to the conflict. Many displaced Azerbaijanis continue to live in poverty as the Azeri government refuses to accept the status-quo. Both sides report numerous casualties, accusing each other on Saturday of violating a ceasefire, a sign that the two-decade-old conflict which has left some 30,000 people dead is far from a peaceful resolution.
Last Update: Apr 08, 2016 1:20 am
RELATED TOPICS